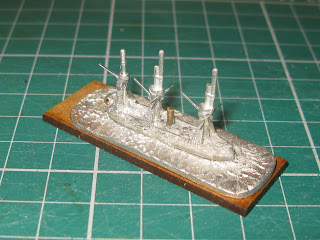 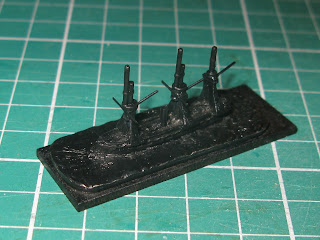 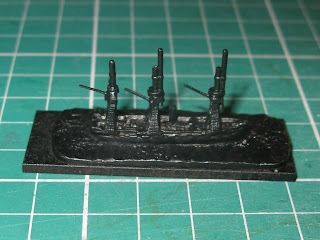 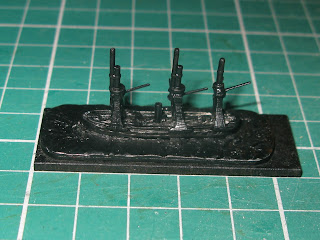 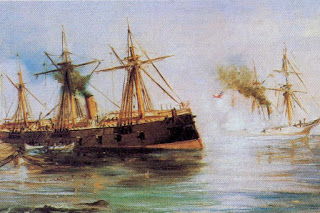 I thought I’d try to convert the Tumbling Dice ASV45 Armide model into the Peruvian broadside ironclad Independencia, rather than just using the model straight out of the box, so to speak. For the Battle of Punta Gruesa the Independencia had her topmasts, spars and bowsprit struck, leaving only military tops and no sails set. The model has no sails cast on apart from a spanker on the mizzen mast, but it does have full masts, so some surgery was required.
To replicate the simplified rigging and military tops, I cut off the top two stages of the masts and bowsprit, cut off the fore and aft sails and spars, then trimmed the tops of the masts to a level surface. I used some spare masts from Brigade Models 1/1200th scale Aeronef cut down to size as the military tops, which I glued on to the stub of the masts, before adding spars and gaffs from metal staples cut to size.
To finish off the job, I cutaway the funnel, trimmed down the deck and drilled a new hole for a funnel, which I then added in the correct place using a section of brass rod. It’s a bit rough and ready, especially where I removed the sails but I think it looks a lot more like the Independencia when she went into action, even though she subsequently grounded and was pummelled into an ignominious surrender by the tiny Chilean gunboat Covadonga.