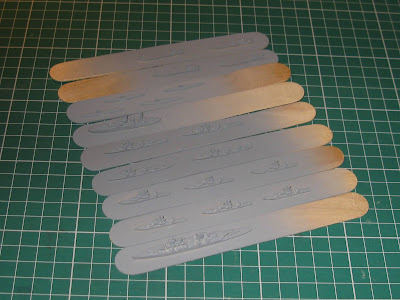 1. Dezember 2020Blogs INTComments: 0
I had a day off today, so have cleaned up and undercoated the Navwar 1/3000th scale ships for my 1960’s Soviet equipped Indonesian naval fleet. The castings were pretty bad, with vertical seams and a distinct list to port due to uneven bases, so they took a bit longer than usual to clean up. The worst of the bunch were the Skory class destroyers, one of which ended up in the bin when I over sanded the hull by mistake. To make up for this I added a Don class submarine tender, one of which was supplied to the TNI-AL by the Soviets to support its Whisky class submarines. I haven’t been able to find any 1/3000th scale Komar FAC’s anywhere, so will probably have to scratch build some, which will be a challenge as they scale out to only 8mm x 2mm!