23. August 2017Blogs INTComments: 0
We played the It’s a Raid Scenario from the
2017 Grand Melee players pack at the Ripon City Wargamers. 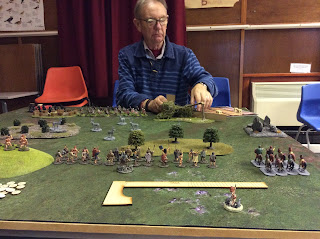 Turn1
Pete used his Vikings against my Picts.
Scenario has 6 tokens (loot markers) placed around the centre line of the table.
when your miniatures come into contact with a token the activation of the unit ends, from then on the unit can only move ’short‘ & cannot drop the token. Markers are only dropped by losing combat or by being destroyed.
The Winner is decided by having most loot markers at the end of Turn 6.
We ended up putting all the markers evenly spaced around the centre of the table. 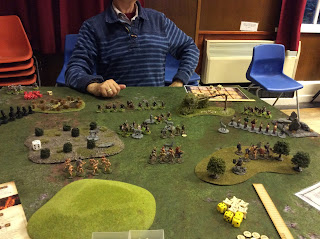 Turn 3
Pete Grabbed 2 Loot Markers early (we used my unfinished fatigue markers for these, which are some Red Deer from Wrbases) on & i managed to attack one of the units making them drop the token, but i couldn’t consolidate the win to pick it up. Whilst my Hearthguard cavalry tried to uunsuccessfully turn a unit of warriors into pin cushions! 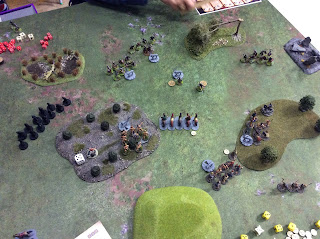 Turn 5
After a lot of toing & froing with the central markers, My unit of 8 tooled up mounted Hearthguard bounced off Petes 4 man Hearthguard!!!
Perhaps i need to get them finished to help them be of some use??
On the right hand side my unit of Warriors sat in some Terrain looking after a loot marker with Masters of the Terrain in play & survived been shot at by the Viking Thralls.
In the end it came down to a draw with both sides capturing 3 markers each.
Another great Saga game.