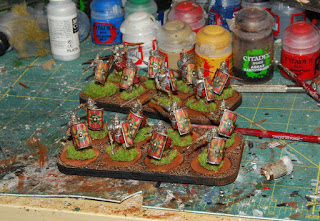 Hey all!
Well, as I mentioned earlier, I decided to go ahead and rebase my son’s Romans.
I had originally done them on stands of eight, all together.  But then I thought… that just isn’t as much fun for a kid.  You want to play with them independently at time, you know? 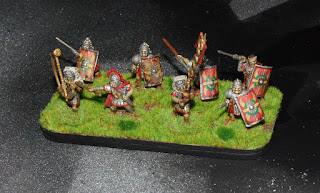 So I got some bases from Litko and have started rebasing!

I finished one unit, and have two more nearly done…. I’m going a little simple with the ones who I had already finished, and I’ll do them a bit different when I start new, from fresh units.

Oh, and there are more coming… another box of Romans, a box of Germanic tribesmen, some German skirmishers, a scorpion for the Romans, and a few generals.