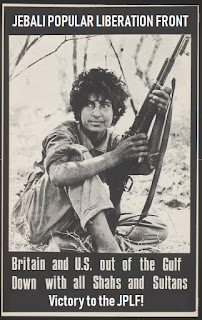 I now have an identity and some background fluff for my Arab nationalist rebel movement that the British and Royalist forces will be fighting in the Sandbox Skirmish campaign. This is the Jebali Popular Liberation Front, which as the name suggests is an insurgent movement based in the mountainous hinterland of the fictitious Arabian Sultanate that the British are attempting to prop up by direct military support and more clandestine means. The JPLF is known to the British and Royalist forces as the Adoo, which in Arabic translates as ‚The Enemy‘ but also in official terms as Ta’ir which is the Arabic equivalent of insurgent. This is an anti-colonial, Marxist liberation movement, so the religious aspect will not be a major feature of the campaign. 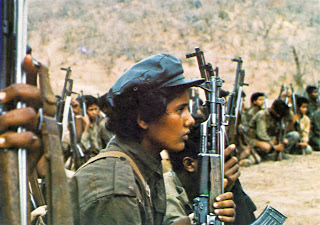 The JPLF is supported by a neighbouring Arab nationalist dictatorship, which provides military supplies, military advisors and propaganda support for the movement, in an attempt to destabilise the region. I haven’t yet worked out any background details for this unnamed state but, if you think of Egypt under Nasser as a model, you won’t be far off. The USA may also be involved in an Olly North clandestine CIA capacity, not directly backing the rebels but throwing the occasional spanner in the works to frustrate the British, in an effort to kick them out of the region (yes, they actually did that!). Not forgetting the Soviets and the Chinese of course, who indirectly supply the weapons, finance and political support for the JPLF.