21. Juli 2021Blogs INTComments: 0
With the release of House of Faith and some actual RULES for Redemptionists (and, y’know, actually PLAYING games again), I thought I should finish up this post I’d started AGES ago! I also have half-written articles about my Escher and Delaque Gangs. It might be a while before I finally post them, as the House of Shadows (Delaque house book) has yet to be released, and I still have a BUNCH of Escher models to finish painting before I  finish up that post… For now, here are Jezebel’s Crusaders!
Unlike the Durango Pipe Moors, Jezebel’s Crusade does not represent a gang dwelling in the Bronze Gates – or anywhere in the Underhive, for that matter. The Crusade is made of regular upper-middle Hive Dwellers from House Cawdor that, form time to time, harry the residents of the Underhive, burning and killing, to root out heretics and mutants and other abominations in the eyes of the Emperor (had His representative on Necromunda: Lord Helmawr). When they have had their fill of carnage and purification, they return to their day jobs as cooks, janitors, production overseers and the like.

A picture of their backsides, illustrating the names on the backs of all their bases. 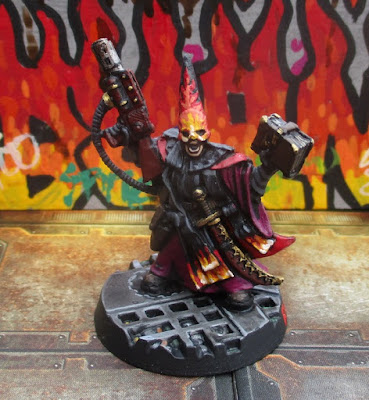 Jezebel the Redemptress is a fire and brimstone preacher that can whip up her flock into a frenzy with her apocalyptic tirades. Always ready to lead the faithful to purge mutants, psychers and xenos! Rumour has it she is a district manager of a office supply chain when not tending to her Redemptionist flock… but no one really  knows for sure…
Jezebel the Redemptress – Redemptor Priestess (Leader)
Mesh Armour, Melta gun, Sword, Stub Gun, Incombustible Hauberk, Book of Redemption
Skills: Iron Will
335 credits 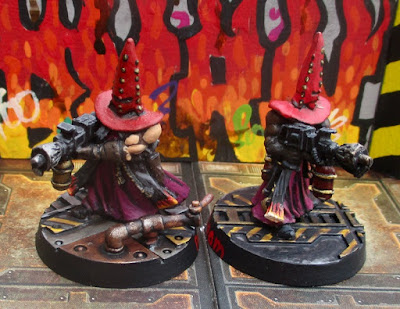 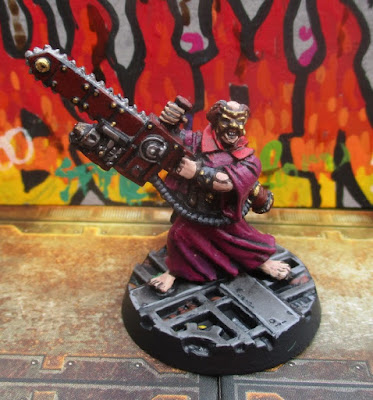 Abimelech the Zealous (Ol‘ Slash n Burn) A House Cawdor office worker by day, he lives for the weekends and holidays when he can go crusading. Cuts what he can’t burn. Burns what he can’t cut. When he isn’t out cutting and burning things, Ambilech is a rather well known sculptor, whose pieces are held in some of the loftiest apartments in the highest spires of the Hive Prime.
Abimelech the Zealous – Redemptionist Deacon (Champion)
Mesh Armour, Master-Crafted Eviscerator, Stub Gun, Incombustible Hauberk,
Skill: Rain of Blows
235 credits 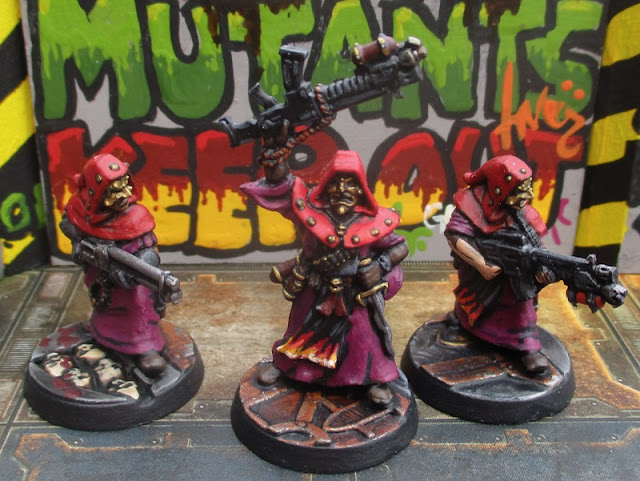 Sister Lilith is a operates a small daycare for Orlock factory workers by day, where she secretly instills the children with the Word or Wrath. Sister Delilah works in a beauty salon. Sister Sapphira is a real estate agent. 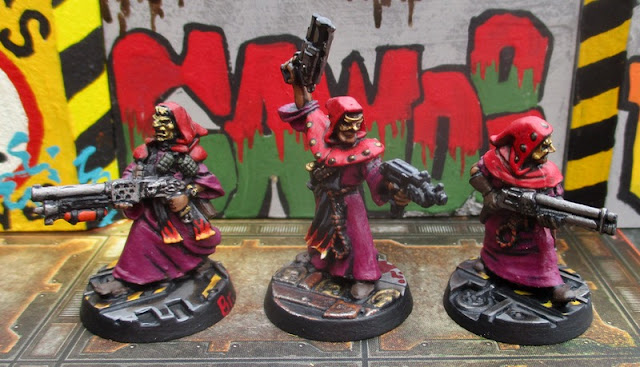 Brother Judas is a low-life thug that acts as an informant to the Enforcers. Brother Tobias is an optometrist. Brother Saul is a Corpse Starch® wholesaler. 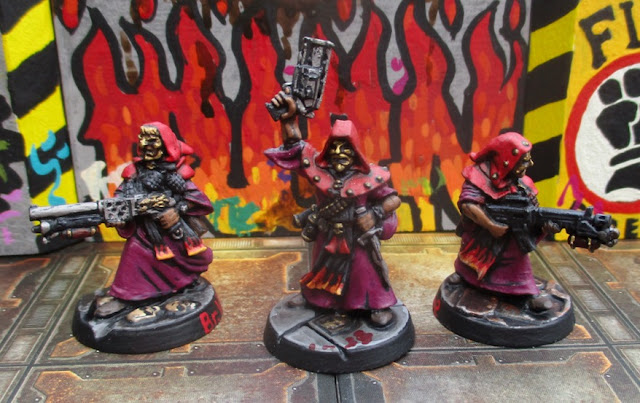 Brother Valac is a dowser for the Water Guild. Brother Zimri is the ruthless manager at a food distribution complex. All of his predecessors on the ladder to manager met with „accidents“. Sister Salome is an exotic dancer in a mid-hive night club.

That’s all for now. Next up should be a Necromunda game report – wherein some of the above Redemptionists will be facing Orion’s Enforcers, who have had it with the Redemptionist’s arsonistic ways…