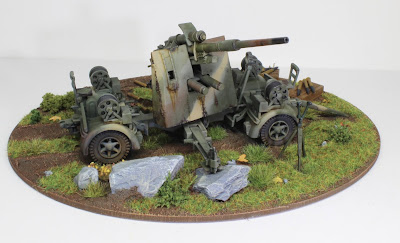 Hot on the heals of the Pak 40, I am delighted to share with you the mighty 8.8cm FlaK 37, again from ‘Rubicon Models’.  Another hard plastic kit this one was much more involved from the point of view of construction and took considerably longer to assemble than the smaller Pak 40.  Part of the problem was my inability to stop small pieces of plastic ‘pinging’ across the art room and landing on the floor, which just happened to be a similar shade of grey to the plastic sprue.  This resulted in much scrambling and swearing*, but eventually the behemoth was tamed!  Once again, I am impressed by the quality of these kits, which have good, clear instructions.  With this particular piece there were options for different shields depending on when, or where, you wanted your model to serve and although some of the smaller details feel fragile, I can testify that they are quite forgiving, even to the thickest of fingers.
*Obviously a model kit to assemble when the pupils are not around! 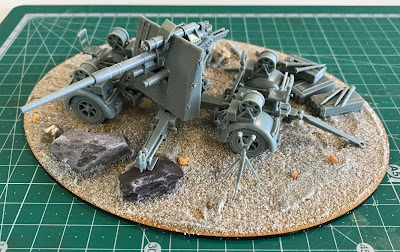 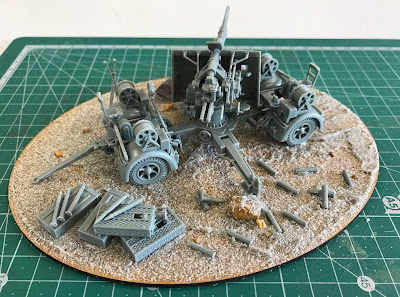 If the sight of a Pak 40 wasn’t bad enough the knowledge that the infamous 88, as it was known by the Allies, was in the vicinity of Schloss Inter would have been a truly terrifying prospect.  Designed originally as a flak gun, the 8.8cm FlaK 37 went on to become an effective anti-tank weapon, capable of launching high velocity rounds great distances and slicing through most allied armour.  The distinctive sound of its shells screaming overhead would be enough to send an icy chill down the spine of any hard pressed tank commander.

It is an instantly recognisable piece of ordnance and the model kit comes with the option to have the gun mounted on the SdAh 202 carriages.  I understand that the weapon could be fired in this state, but that it was more usual to have it dismounted, giving greater elevation and stability.  Practicality might be all well and good in the real world, but I just loved the look of the mounted gun and so managed to persuade James to cut me an oval shaped MDF base to mount the fully assembled kit on.  As with the previous models there are a good selection of extras in the shape of shells, spent cases, ammunition boxes and even the battery commander’s binocular periscope along with a useful set of waterslide transfers.  There is also a full compliment of crew, but again I have decided not to use these for this encounter, keeping the model as a static piece to be crewed by the attackers if they so wished. 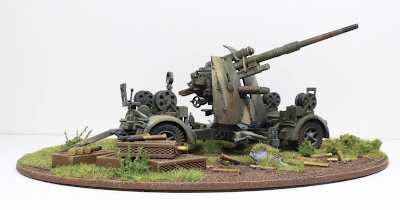 With regards to the Battle of Schloss Itter, the 88 had been spotted barely 800 yards away to the North West of the Castle on the day of the engagement.  Only too aware of the potency of the weapon, initially it was hoped that it was being deployed to counter any relief column that might come to the aid of the defenders, but when a round slammed into West side of the keep’s third floor, as seen below**, any optimism evaporated.  It does seem strange, however, that the barrage didn’t continue, unless of course that the attackers were keen that some part of the Schloss remained standing after the onslaught? 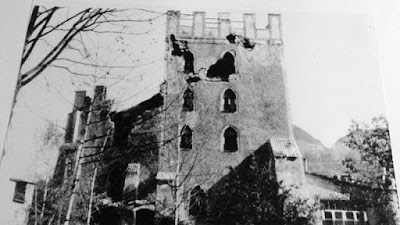 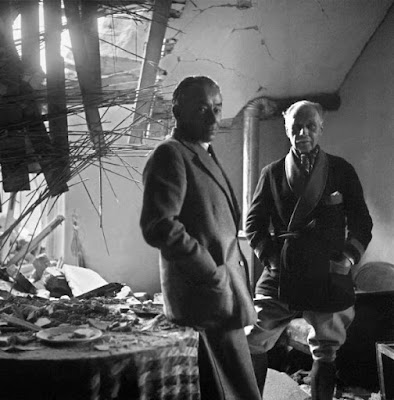 **Former Prime Minister, Paul Reynaud & General Maurice Gamelin put their differences aside to remonstrate over the intrusion to their petit déjeuner!
For the purposes of our game crewing the 88 should clearly have a big impact on the game play.  We have arbitrarily allocated dice and damage to the piece, again deemed a ‘Special Item’, but we may need to revise this when play testing continues.  Perhaps there needs to be a greater number of miniatures in base contact to ‘crew’ the weapon, making it harder to manage?  I was quite taken by the comment of Terry Silverthorn, of ‚Miniature Mayhem‘ fame, on the previous post who suggested that on a given dice roll, the gun would be deemed ‘out of ammo’ and therefore no longer serviceable.  This would then mean that the attacker would have to reconsider their plan for neutralising the defenders. 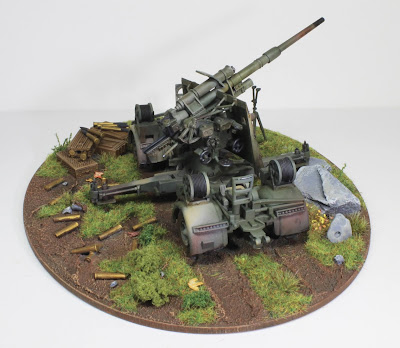 Regardless of its use in the game, this has been a fabulous piece to work on.  I thoroughly enjoyed the assembly and wanted to give it the best paint job I could.  I decided to embrace the camouflage pattern attempted on the Pak 40, this time going for a little more subtlety along with some wear and tear.  The base was designed to tie in with the previous piece, and indeed the game boards, and was great fun to do, especially hinting at tracks in the mud.  I have to confess that I am thoroughly enjoying the period and whilst I still have a lot to learn, feel that I am making progress all the time.  Given the scale of the piece, and how thrilled I am with how it turned out, I shall have to add it to the ‘Command Stand’ page. 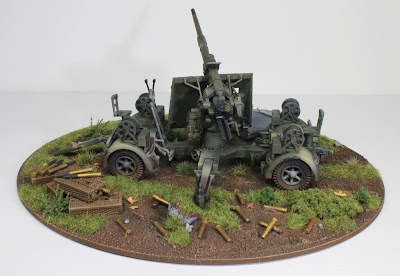