29. Dezember 2018Blogs INTComments: 0
The Kings of War Vanguard skirmish game has quite a few scenarios and most required specific terrain. The terrain pack that come with a few useful items a few that I’ve shown before and a few more in the photos that follow.

One that isn’t included in the pack is the „Portal“, a doorway to another dimension or world. We used a Wizard’s Pentangle when we played the scenario last time, but since the portal counts as being height 3 and that is flat, it wasn’t ideal. Mantic do include a suitable portal in another set but I thought I’d have a go at creating my own.

I’ve had the archway that I’ve used for a very long time. It’s a resin model from Grendel. I’ve even had it painted as well. What it needed was a swirly bit to count as the actual portal itself. That I’ve made from a printed out graphic on inkjet transparency paper with Water Effects used to glue it in place and supply a suitable texture. It looks even better with a bit of backlighting.

I also made a pedestal for it for use with my medieval city since it’s supposed to be on a small hill. I’m hoping that will also prove useful as a base for the crane I have, though I’ve not tried that yet. 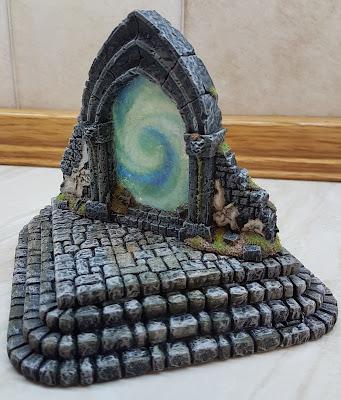 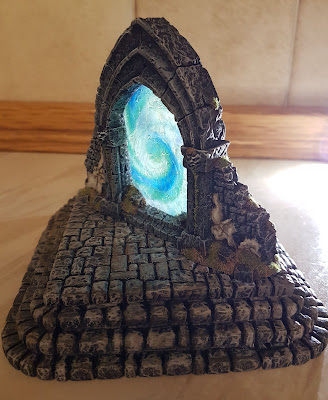 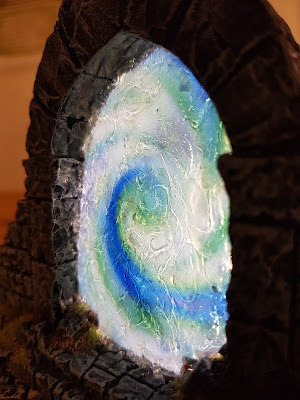 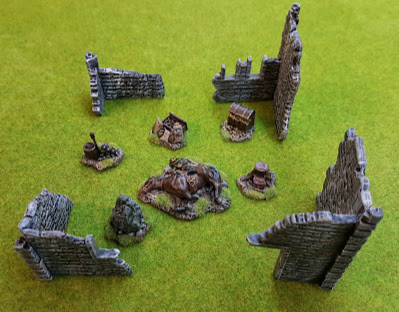