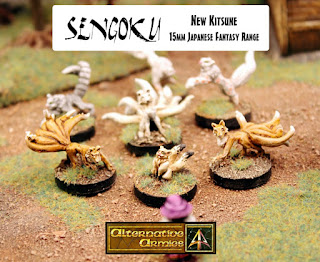 New miniatures sculpted by John Bell in the biggest 15mm selection of Japanese myth inspired fantasy in the world.  Over one hundred and fifty poses in the range and growing.  A pack and single choices as always with Sengoku.  Go HERE.

Stories depict legendary foxes as intelligent beings and as possessing paranormal abilities that increase as they get older and wiser. According to folklore, all foxes have the ability to shape shift into human form. While some speak of Kitsune employing this ability to trick other stories portray them as faithful guardians, friends, lovers, and wives. The more tails a Kitsune has the older, wiser, and more powerful it is. Because of their potential power and influence.

SGFP44 Wild Kitsune. This pack contains six mixed miniatures of three types.  Wild Magical Foxes with multiple tales capable of magical feats. The mix of poses is even. Taken from codes SGF154,155 and SGF156.  This pack offers a saving off single purchase. Singles under their codes are on the website. 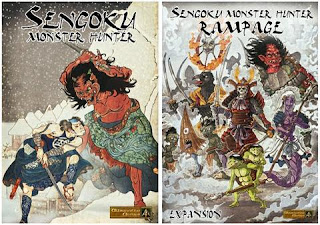 While you can use the Sengoku range of miniatures for any game in this scale there is an excellent game system at Alternative Armies which uses these miniatures.  Two books written by Steve Danes (he of Furioso and Doom Squad). In PRINT or a DIGITAL DOWNLOAD at a twenty percent less.

Sengoku Monster Hunter.  A game for one to four players set in medieval Japan where monsters and creatures of myth roam the jagged crags and hidden valleys of the Sacred Mountain. It is from the Sengoku setting and has merciless hunters who track down the monsters and slaughter them at every opportunity. Who you Play. Hunters are the players characters in the game. Each hunter has a profile of attributes, skills and special abilities that players can improve if their hunters are successful.

Sengoku Rampage. Rampage is the second book in the Sengoku Monster Hunter series; the game set in a mythical Japanese past of fierce monsters and even fiercer monster hunters. This is a supplement to the original rules and it provides much more material for playing Sengoku Monster Hunter. It’s features are: More Monsters More Encounters. New Hunters and Clans. New Hunting Grounds including the Underground. Monster Rampage which is a larger version of the game where the Hunters become the hunted. 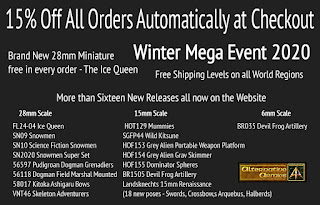 Winter Mega Event 2020 is on! 15% off all orders automatically, free new Ice Queen miniature included automatically, Sixteen new releases and more. Everything we make is in this event all scales, all setting, all periods, all models and all books. Lots to this all explained on our BLOG. Event lasts entirety of November.