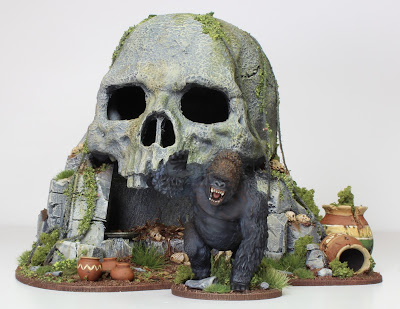 With the jungle terrain now assembled ahead of our game of Congo my mind started to wander with regards to all the possible additional pieces I could add to make the experience truly immersive.  At the centre of table was to stand Kong’s lair, described in the scenario as a tree large enough to shelter the great ape.  Well yes, I could have done that, but when you hear the words ‚Kong’s Lair‘, what do you think of?  Remnants of a once great civilisation, now lost to the ravages of time and the relentless march of the jungle?  Possibly a cave system with precipitous drops and steaming vents, hinting at the island’s geographical instability or perhaps the remnants of those challengers foolish enough to attempt to dethrone the king of the jungle?  A tall tree just wasn’t going to cut it! 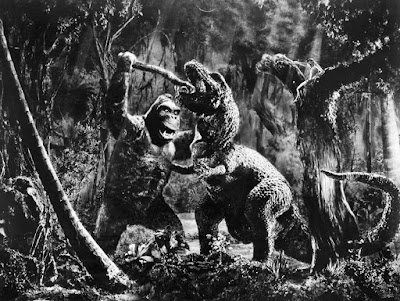 Just the very mention of Skull Island is enough to get the imagination racing and since Kong’s first celluloid outing in 1933 it has remained a forgotten, secretive place where wondrous and deadly creatures have lived, undiscovered for millenia.  In truth, Skull Island could be a life’s work, so how to bring a little bit of cinematic magic to the tabletop?

I often find it amusing how the most unexpected of discoveries can lead me on some of my most enjoyable flights of fancy and this was to be another case in point.  As I was perusing the virtual aisles of ‚Swell Reptiles‘ looking for that just so shape of plastic vivarium plant, I happened upon an ‚Exo Terra Primate Skull‘.  This was a small, 10cm x 9cm x 9cm white resin, humanoid skull for £4.99 and as soon as I saw it I knew that I had discovered Kong’s lair!  Once safely delivered to Awdry Towers the hastily sketched plan was consulted and away we went, sawing, cutting and sanding offcuts of blue foam to form a base for my skull.  I had envisaged a cave like sculpture and so had to assemble the pieces to give the impression that the skull had be hewn from the rock itself.  I had limited myself to a fixed base size using the terrain tiles from ‚East Riding Miniatures‘, which also had the added benefit of linking it, visually, with the ‚Dangerous Jungle Terrain‘ pieces. 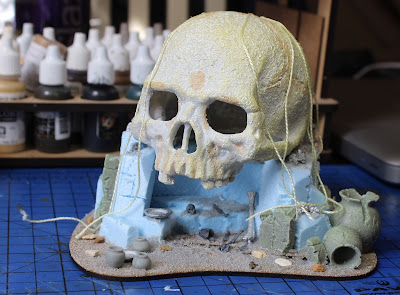 With the basic shape assembled I layered pumice gel to give it a more organic feel before rummaging through the bits box to see what other treasures I could unearth.  I happened upon some ‚Fenris Games‘ ruined stonework rubble, which I was able to intersperse with my crudely cut blue foam pieces giving everything a little more depth and along with some of their large broken pots I started to consider the idea that offerings had been left to the mighty Kong to pacify the beast. 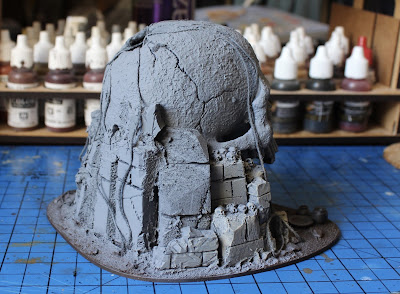 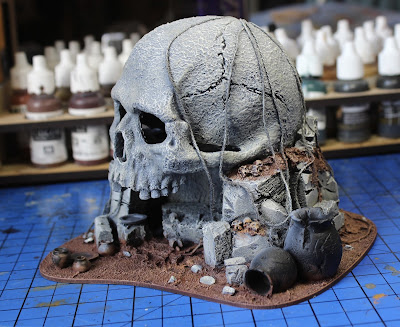 This idea spawned additional, smaller pots and salvers* and then it was time for the skulls!  I’m not sure why, but I seem to have an array of miniature skulls from a variety of manufacturers and these were liberally positioned as if they were gruesome trophies.  Additional body parts littered the nest area of the interior before the final addition of some jungle vines, using embroidery threads, were added.
*Which were actually medieval shields from some long forgotten project! 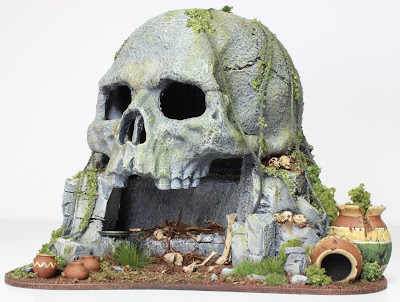 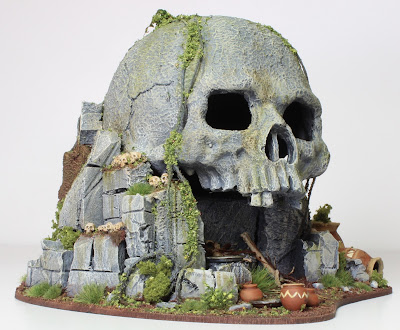 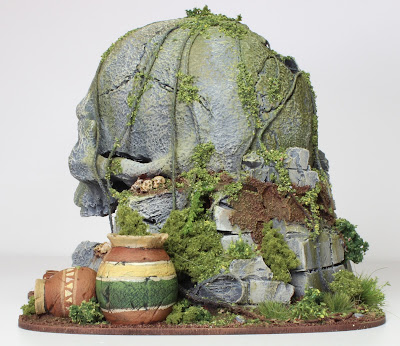 When it came to the painting, the piece was airbrushed with a couple of tones of grey* and then the earth matched to the previous stands.  Lots of washes were applied to give a more naturalistic feel to the rock as well as hinting to the never relenting creep of the jungle.  The final touches included some leaf litter and clump foliage with one or two judiciously placed tufts.
*All rocks are grey, right? 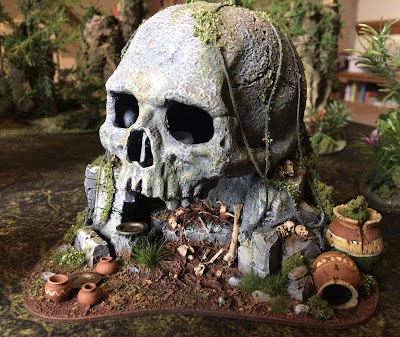 With that my homage to one of the silver screen’s most endearing monsters was complete, all that was needed now was to introduce Kong to his newly appointed lair. 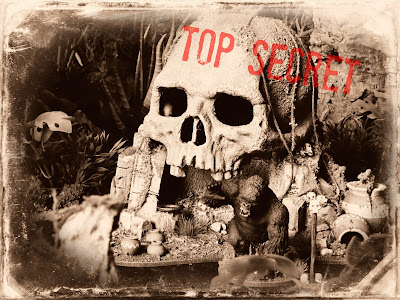