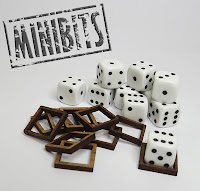 In Bag the MiG and quite a few other sets of modern rules, there are more than six levels of altitude, which you can usually represent using D6 or a counter of some sort. I use 7mm blue D6 for games of Bag the Hun and will do the same for the Target Locked On! flashpoint projects. For Bag the MiG, however, you need up to twelve levels of altitude, so the humble D6 isn’t really up to the job. 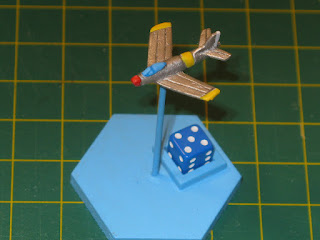 I’ve decided to use two different coloured D6 as a result, with the normal blue one for Level 1-6 and a white one for the higher altitudes up to Level 12. This should make it easy to track altitude over all twelve altitudes without having to come up with a different system of basing. I did consider using two smaller 5mm dice together in a double frame but thought it would look silly and would be far too fiddly.
Anyway, to cut a long ramble short, I’ve ordered some 7mm white D6 from Minibits to do the job and, at only 60p for ten of them, it won’t break the bank. I really need to start painting the 1/600th scale planes for both Bag the MiG and MiG Alley soon, now that the Bag the Hun club game is out of the way, as I’d like to get the Korean War project re-booted before the end of the month