29. März 2018Blogs INTComments: 0
Since the previous post was one with European style armor, it seemed only fair to post one with armor from the Far East. This even more so as the recent games I played were with Samurai. Also, I don’t think I’ve posted on with this kabuto. The kabuto is sort of Heian and Kamakura. The helmet bowl with large rivets are Heian (12th C.), but the wide, flaring shikoro (neck guard) is more late-Kamakura – early-Muromachi (13th-early 14th C.). This was a custom helmet made by Iron Mountain Armory. The rest of the armor is later period, 16th C. 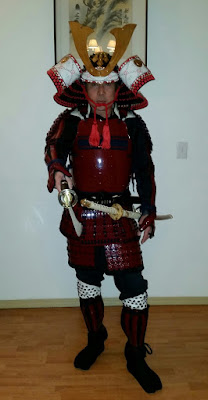 Anyway, I got the urge to put on the armor after watching old Zatoichi movies on YouTube; and finishing off a pint of Old Rasputin Imperial Stout. On the painting front, I’m still waiting on a Tamiya 1/48 251 Hanomag to arrive from Japan. I couldn’t resist the price ($17 USD free shipping); but it’s been about three weeks now since I won it off ebay. On the gaming front I need to order a copy of Pikeman’s Lament as this seems to be the direction the Rampant group of locals are heading in. I also wouldn’t mind building either Polish or Ottoman force. The Winged Hussars and Janissaries from Warlord Games look pretty  nice. Thank you very much for stopping by.