Lost Giants of the Congo. 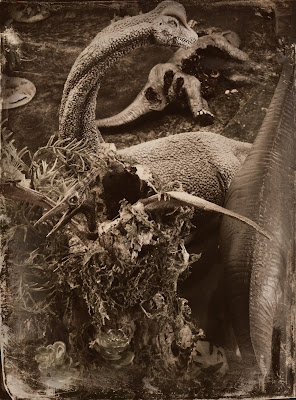 Hosting and playing ‘Congo’ during the summer was, in many ways, the highlight of my hobby year.  I thoroughly enjoyed the planning, preparation and participation of the day, but when the dust settled I was left feeling somewhat spent.  This combined with a particularly busy start to the academic year has meant that the hobby has been sidelined of late.

What I needed was an injection of enthusiasm so imagine my excitement when I was alerted to fact that Issue 358 of ‚Wargames Illustrated‘ contained a scenario to set ‘Congo’ in the Lost World!  Safe in the knowledge that the ‘Saintly Mrs. Awdry’ was heading out to the golf course I quickly assembled the characters and creatures required to give it a go.  What follows is my account of the adventure.

The premise for the game saw two rival factions hack through the dense jungles of the Congo in search of Mokele-Mbembe, ‚one who stops the flow of rivers‘.  This large creature, the stuff of legend, could provide proof that dinosaurs still roam the earth and the race was on to find the evidence.  The pre-game administration found that Colonel John Hammond, Scots Guards retd., would enter the game ‘confused’ for two turns, whilst Professor Challenger, the Scientist would be confused for just the one turn.  The confusion rule simply means that each player must draw three random action cards as opposed to carefully selecting them depending on the circumstances. 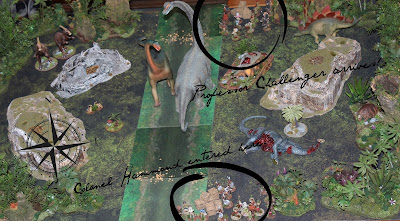 Turn#1
In the opening round, Professor Challenger and his adventurers move into the clearing to witness all manner of strange creatures and exotic flora.  Similarly, on the other side of the clearing Colonel Hammond’s column enters the fray, with one group crossing the river.  In this scenario anytime a group finds itself in the water they must roll a D6 to see what happens.  Conditions vary from a spooked native that runs away never to be seen again to a mighty Sauropod rising from the murky depths to attack the group.   In this instance nothing untoward happens.  In round two the Scientists are rooted to the spot, a combination of the cards drawn and the wondrous sights around them.  Meanwhile Col. Hammond moves two teams into position and bags the first piece of loot!  The final round sees three successful terror attacks launched on the Colonel’s various groups.  This leaves his young warriors looking decidedly shaky. 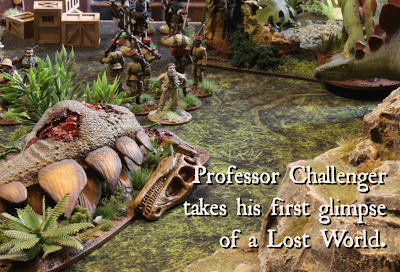 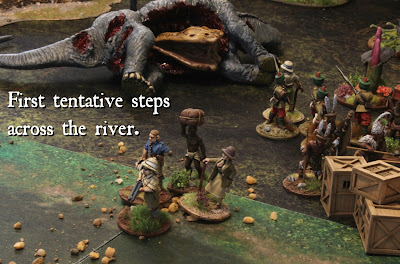 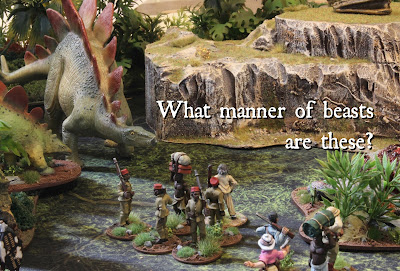 Col. Hammond starts the round by launching a terror attack of his own on the Professor’s adventurers, whilst a movement action sees him exit the board with the first piece of irrefutable evidence.  Finally, he uses a totem card to move his fearsome Ruga Ruga closer to the rocky outcrop. 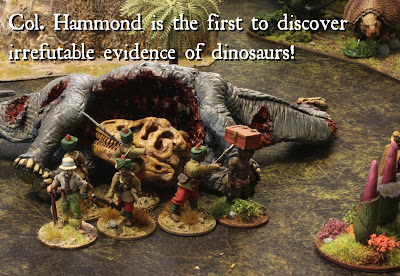 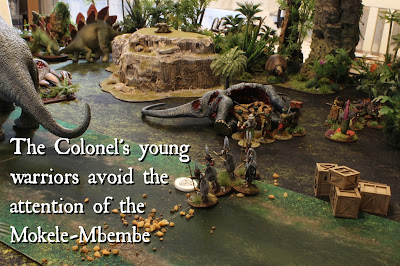 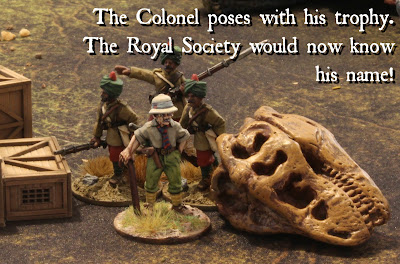 As Professor Challenger explores the rocky escarpment he rolls a 4 and a 7 on the terrain table, which inadvertently generates some loot placed particularly close to the other groups; they are apparently on sacred ground where cult objects are scattered everywhere! Meanwhile his adventurers, exploring the worryingly savaged remains of a Stegosaurs roll a 6 and 9 – Dinosaurs!  A bearer and a fat adventurer are instantly ripped to shreds! 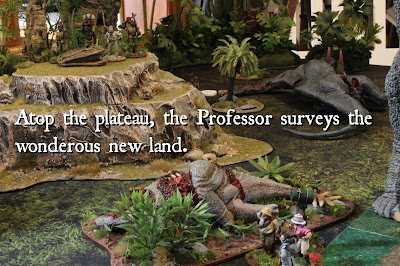 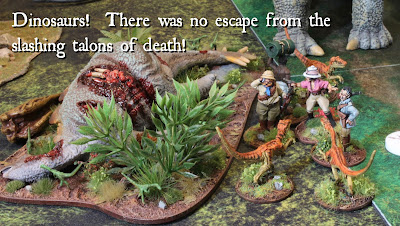 Colonel Hammond’s Ruga Ruga move into a new area and roll an 8 and a 0 to discover a dying native.  The cold hearted Scot orders his men to leave the poor man, choosing to attract the wrath of the native’s ancestors rather than slow down the expedition. 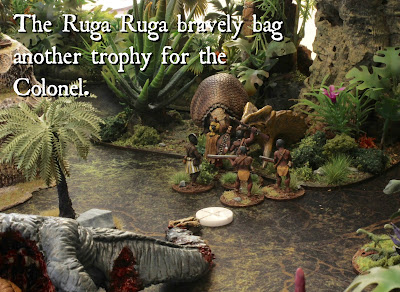 Whilst the Ruga Ruga are enjoying some success, the Colonel was dismayed to hear that his group of adventurers, having rolled a  5 and a 5 on the terrain table, had to flee!  The sound of giant, leathery wings clearly distracting them from securing the evidence required.  Four movement actions end the turn for the Colonel’s men. 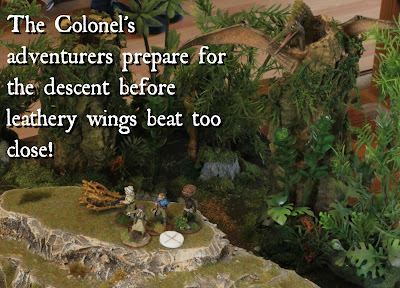 Professor Challenger and his team start to move off the precipice, their precious evidence in the bag.  Meanwhile his young warriors enter a piece of uncharted terrain rolling a  2 and 5 on the table – all is well.  Similar good fortunes see his band of Ruga Ruga cross the river without incident, whilst the adventurers chose a heavier load for their weapons and tentatively move back towards the corpse.  Exchanging a couple of totem cards for an extra d8 and d10 two vicious Velociraptors are put down for good!  Finally a +1 action totem sees the young warriors off the board with their loot – this was turning into a fine day for academia. 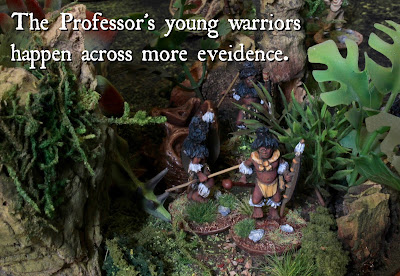 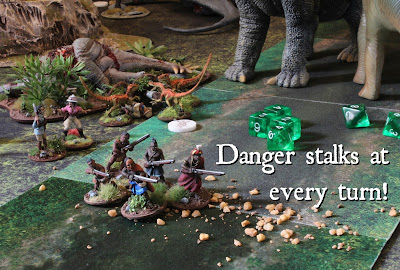 Turn#3
Colonel Hammond has the initiative and chooses to discard a totem card to reduce the stress of the  young warriors, all the time his band of Ruga Ruga edge closer to their goal.  Meanwhile, having got safely across the river, Professor Challenger’s Ruga Ruga enter the terrain in search of what could prove to be the final piece of evidence required to convince the Royal Society that dinosaurs still roamed this earth.  They roll a 3 and a 2, receiving a good omen that allows them to take back a totem card.  With the +1 action card re-gained the fearless adventurers activate to force another melee with the dinosaur – a draw!

The Colonel’s  young warriors head back across the river, but are spooked again at the boiling water, what terrors lie beneath the greasy, green surface?  More encouraging news for the embittered veteran came in the form of his trusty adventurers who had rallied themselves and had started to make their descent with their prize in tow.

The Professor’s Ruga Ruga move back through the water and draw a movement stress token, whilst his adventurers force another draw with the defiant Velociraptor.  Another three rounds of terror attacks from both sides see out the turn. 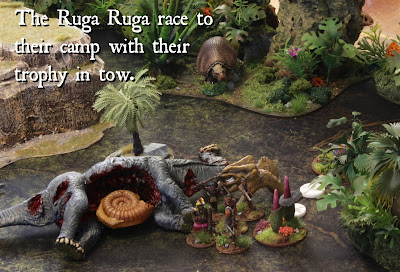 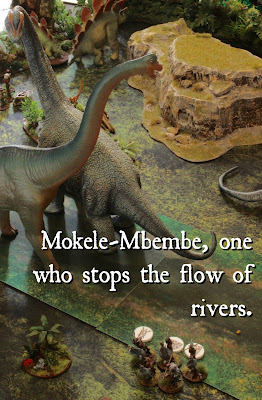 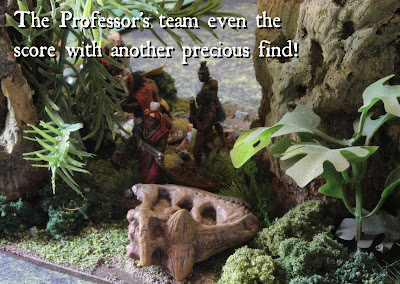 Turn#4
The action was coming to a head at this point and Colonel Hammond, eager to steal the initiate, uses a totem card to remove a stress token and then tries to rally his young warriors to reduce two more.  At the same time his adventurers move into the river, but their bearer is spooked and runs away – this wasn’t part of the plan!

In stark contrast, Professor Challenger’s Ruga Ruga move through the water, they are still jittery and draw a stress token, but emerge safely on the other side and off the table.  Requiring just one more piece of irrefutable evidence before the column can start to make its way home the Professor’s adventurers try to overcome the dreaded dinosaur.  There is a deafening roar of gunshots and as the acrid smoke lifted on the brutal encounter it was clear that the beast was finally defeated.  Making use   of their +1 scale totem card, the adventurers make it safely back to camp and win the game for the Professor. 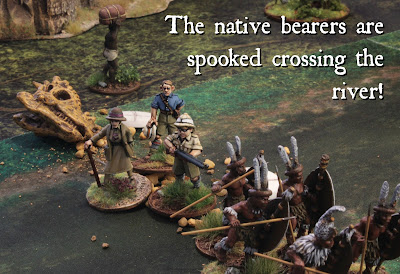 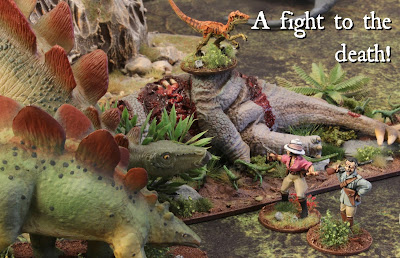 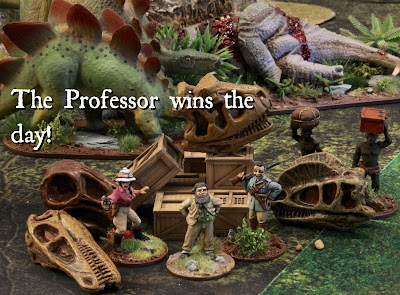 A close run thing with a totem card handing the Professor the game.  Neither column engaged the other in combat with both teams keeping to their side of the board.  No Sauropods were activated by the river crossings and only one group of meat eaters was encountered.  My interpretation of where the additional loot was distributed almost certainly dictated the nature of the game and because I was playing this as a solo encounter it descended into more of a sprint to get the evidence off the table, fortune and glory being the order of the day; not, I hasten to add, that this made it any less exciting.  At any given moment there was the real possibility of the giant Saurapods causing havoc at the crossings or the ferocious Velociraptors springing forward from the rocky outcrops to disembowel any adventurer unfortunate to be in range of their razor sharp talons.

Perhaps most importantly it allowed me to get out the jungle terrain and my beloved dinosaurs and enjoy a rip roaring game using a set of rules that are proving to be wonderfully versatile and great fun to boot.