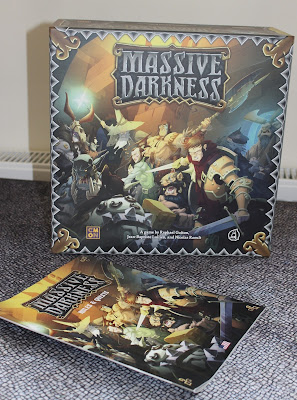 Yes, I know I promised a series of posts about jungle terrain and newly painted miniatures, but the truth of the matter is that I have been somewhat distracted by the latest offering from CMON, ‚Massive Darkness‘; yet another Kickstarter that I backed in April 2016.  Billed as a cooperative board game and building on the successful Zombicide: Black Plague mechanic, I nearly let this one pass me by, after all I have more plastic miniatures than I will ever paint.  Yet a chance email exchange with my good friend Stefan of ‚Monty’s Caravan‘ fame caused me to think again – solo play being the eventual hook that saw me pledge.  Well that pledge duly arrived at ‚Awdry Towers‘ last weekend and since then all I seem to have done is venture further and further into the tunnels and dungeons, fighting guards and monstrosities along the way! 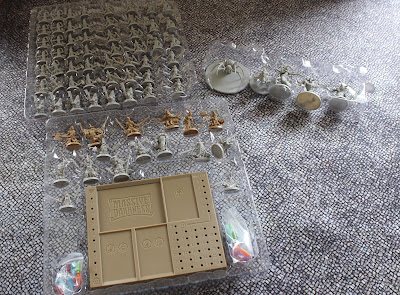 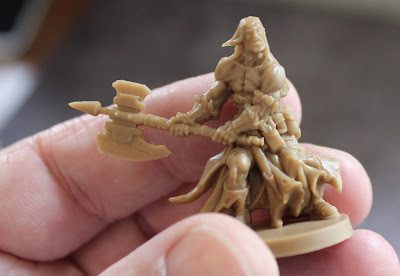 ‚Massive Darkness‘ is a dungeon crawl and allows standalone adventures or the option to play in story mode, building your characters‘ abilities along the way.  A huge fan of Steve Jackson and Ian Livingstone’s Fighting Fantasy gamebooks as a boy, I was really looking forward to this and with what I thought was a fair understanding of the mechanic being used couldn’t wait to get started.  The first thing that needs to be said is that this being and CMON Kickstarter there was a mountain of plastic to unpack!  These photographs just show the core box and don’t include all the wondrous goodies that came as stretch goals.  The plastic miniatures are exquisitely detailed and I am sure will take paint just as well as the Zombicide versions; already there are some firm favourites that might yet skip to the head of the painting queue! 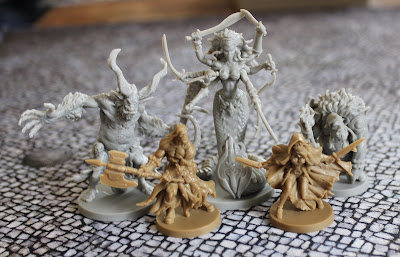 The quality of the card stock used for the sumptuously designed dungeon tiles is, as we have come to expect, superb and in fact all the pieces have that reassuring feel of quality to them and so it will come as no surprise to hear that the tutorial game was set up on the practice table* and away we went. Dutifully laying out the game as described, I started to become aware that there was an awful lot of paraphernalia on the table.
Yes I am aware of how pretentious that sounds, but it really is a Godsend!  I have set up a small table in the spare room, which means I can leave unfinished games out overnight rather than pack them away so that we can use the dining room table – why hadn’t I thought of this sooner? 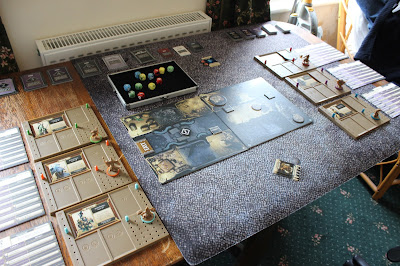 Event cards, door cards, treasure cards**, guard cards***, roaming monster cards, tokens, dashboards and class sheets – it was a good job that I was just playing the tutorial with only two board tiles on the table!  Unperturbed I ventured on, but couldn’t help reminiscing that back in the day all I needed was an HB pencil and a couple of D6s!  Still it wasn’t long before I was opening doors, picking up treasures and battling guards and banished such trifling matters as being uncharitable.
**Five sets one for each level of Darkness.
***Again another five sets!
Tutorial successfully completed it was time to get to grips with the first quest proper and at this point my issues with just how busy the table was started to resurface.  It all seemed incredibly faffy, I mean ridiculously so  – it was time for a rethink.  I am not a overly stupid man, but there I was sitting at a table five feet long by two and a half feet wide, covered in a multitude of cards and plastic miniatures and not really enjoying myself.  The need to check and recheck the class sheets of each of the characters, that were in turn separate from the player dashboards, meant that I was having to swap between distance and reading glasses and all the time getting more and more frustrated.  The absolute joy of Zombicide: Black Plague is its simplicity, the ability to fully immerse yourself in the story and enjoying the colloabtive nature of the game, ideally with friends, is what made us return to it time and again as our game of choice.  How then had CMON got this so wrong with Massive Darkness?  Of course the answer is they haven’t, it was me!
In my bid to get going as quickly as possible, I had rather fallen foul of the old maxim that a little knowledge is a dangerous thing!  Assuming that ‚Massive Darkness‘ was, in effect, Zombicide: Black Plague by a different name, I had completely missed the point; this is a different game and should be treated as such!  The first realisation came with the number of guards that were spawned as you enter each room, it is dependent on the number of adventurers on the board. The more adventurers the more guards, so why was I trying to run all six adventurers at once?  By reducing my heroic band to a Wizard, Barbarian and Bloodmoon Nightrunner**** I was instantly able to really focus on what was important.  The class sheets, the paper pages used to record the characters‘ progress, were no longer spread all over the table, but stacked in order to make it easier to access.
It was starting to feel more like the games of old, where interaction and understanding your character’s unique abilities were key to success in your chosen adventure.  If you follow this approach through to its natural conclusion then the mechanic of the game should allow you to venture into the dungeon with just one character and still succeed in your quest, but I haven’t been brave enough to try this yet!
****Thief/Assassin in old money!
So where have these revelations left me with regards to my ‚Massive Darkness‘ enjoyment?  Mightily relieved for one thing!  I now feel that I have a much clearer understanding of what the game is all about.  As with my previous experiences of CMON board games there is a depth to them that isn’t initially apparent.  The subtlety of the rules allows for complexities in the gameplay that will keep me engrossed for some considerable time to come.
Already we have had scenarios that have thrown up interesting, almost cinematic moments be they the classic ‚bug hunt‘ or a ‚temple run‘ style game that saw my adventurers race to the exit before the roof to the dungeon caved in, wonderfully realised by removing the preceding tiles according to the game mechanic.
It is a totally immersive game and the secret to its success is making your individual contribution exactly that – individual.  My initial mistake was trying to be too inclusive assuming that the more adventurers the better, something that we have found in Zombicide: Black Plague.  With ‚Massive Darkness‘ the enjoyment comes through the development of the individual characters and I am really looking forward to playing this with a couple of friends to see how their own characters develop through the twists and turns of the dungeon’s tunnels. 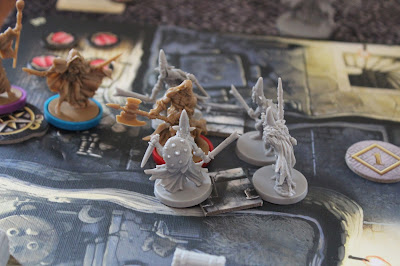