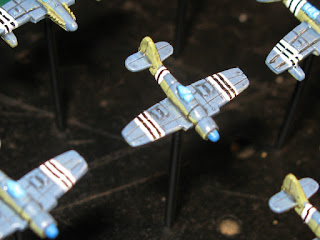 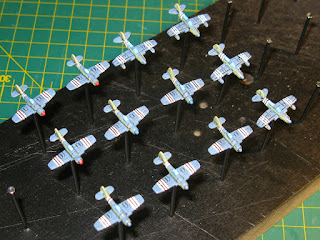 I had a go at the black lines on the ‚invasion stripes‘ last night, using a 0.3mm drawing pen, which wasn’t as difficult as I thought it would be, even if some of the lines went a bit wonky and will need to be cleaned up. I had to cheat on the Sea Fury fuselage bands, which are very narrow so could only fit a single black line, but I think they look okay. I also mucked up some of the fuselage bands on one side of the Fireflies, partly due to the difficult angle at which I had to use the pen and partly due to a blip in the casting which threw the line off course. I’ll tidy everything up later and then start on the decals, which should be relatively simple to do, I hope?