21. Juli 2017Blogs INTComments: 0
Every now and again you have one of those games that really spikes your enjoyment of the hobby.
Sunday night saw the dusting off of the Wyverns ACW collection using Sharp Practice and a reminder of why these rules are one of my favourite.
A simple engagement with both sides looking to break each others morale.
It started so well for the South, a good roll on the morale chart and a force morale of 11 for the encounter vs the North’s 10.
The forces were reasonably even, we (the South) opted for a marksman, a medic and another section of Regulars where as the blue coats went for ammo and water carts together with an extra section. 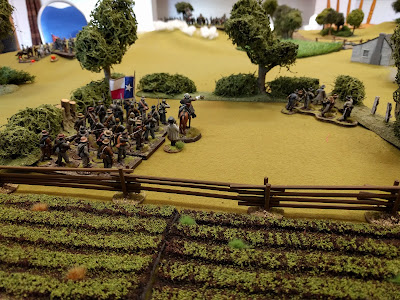 The North flanked left seeking out the open ground as we sent our skirmishers through the trees on the right.

Pushing our main force through the field our commander stood in something rather nasty taking his status down a level, I was now wishing he paid for that water cart.

At every turn the boys from Texas seemed to be facing two regiments and were slowly worn down by both enemy fire and the local ladies who called a few of my lads away. 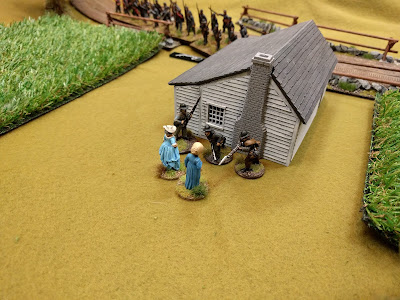 Skirmishers nibbled away at the formed bodies but the crashing volley’s and the excess shock forced the South to retire losing by a single force morale point.
Still the poor run of form continues for Captain Story of Milam County.
A cracking evenings gaming and to think I was on the verge of putting these on ebay.