More work on the Dead’s Army board 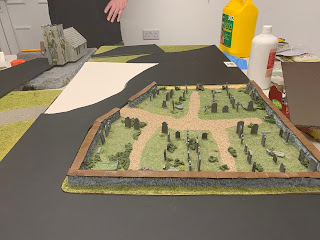 Myk and Carl were round for a scenery Wednesday, so we had a meeting of minds to debate what to do about the warped graveyard board… Having resigned ourselves to the fact that no amount of applied PVA, paint and/or brute force was gong to fix the warp, we debated either embedding it in one of the foam tiles or essentially building it a foam core ’sabot‘ base that we could use filler to hide the last bits of warp.

Et voilà, as they say in French. We went with the latter approach, and a big piece of 5mm A0 foam core – technically it’s about 6mm narrower than the boards, but this won’t be an issue.

We also rather brutally removed one wall, to address my objection that village churchyards in England really don’t generally have separate cemeteries, and the spare bits of wall will get reused to extend the churchyard. 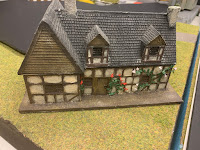 Next time, we’ll filler the edges where they need it, cut some more foam for the rest of the churchyard and landscape it. Usefully, this being foam core, we can pin it to the underlying blue foam terrain tiles.

In addition, I added some climbing roses to Godfrey’s cottage. Flowerpots to follow 😀