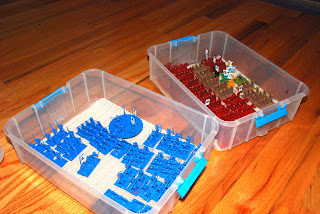 In all the excitement of daddy working on a samurai army, it was pretty clear the boy would have to have one too.

Well, thanks to daddy having based a million samurai from the old game Shogun… 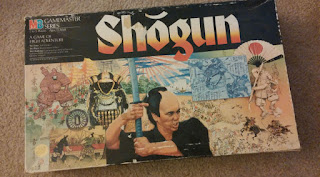 Basically they were based in groups of ashigaru, archers, guns, samurai, or ronin.  I made up some command stands as well for each of those, with a daimyo, banner, and soldier on each.  I also made up a big army command stand for each army… you can see it below, on the huge round stand.  After I finished up the armies I had enough figures to do five hero figures… basically samurai mounted on round individual stands, with personalized sashimonos. 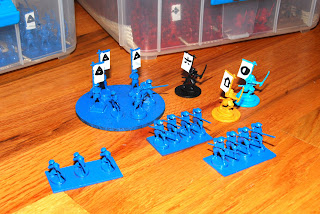 Painting was super simple… one army blue, one red.  One got Hojo mon, the other Takeda.  About twelve stands of ashigaru were painted a brownish color, and then I painted their hats yellow to represent straw hats… these act as peasants.  The heroes were undercoated white (well, except the black one) and then given different colors.

I also have one ninja, but he is based differently… on a big round base and painted… because I did him up when I was young.