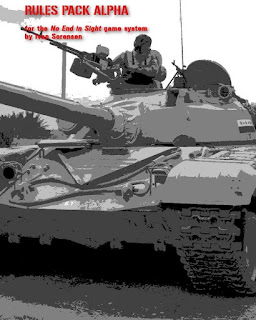 I’ve decided to go for a platoon rather than a squad level approach to the Sandbox Skirmish project, which means that I can use the Nordic Weasel No End in Sight Rules, which I think look really good and have been wanting to explore for a long time. I have both the old and new versions of the rules but thought I’d take a closer look at some of the add on supplements and battle packs, which I thought might contain some useful bolt on bits.
I noticed that the Rules Pack Alpha supplement was reduced to only $1.99 today and included guidelines for converting NEiS to squad level skirmish scenarios, so I grabbed a copy as I thought this might be ideal for some of the actions I’d like to run. I also skimmed the contents of the first NWG Battlepack and found a similar set of rules modifications for raid scenarios using only a handful of figures, very much as the SAS might get up to in my campaign.
There was also a three page system for generating a platoon, which seems a bit superfluous but adds some really deep background to the whole thing, including the impact of previous events on the composition, leadership, motivation and morale of the unit. I really like this idea, so will be running it when I build the British infantry platoon for my patrol campaign. As it says at the end of the platoon generating sequence, ‚At this point, your platoon should feel a bit more worn and ready to take the field‘
Perfect!