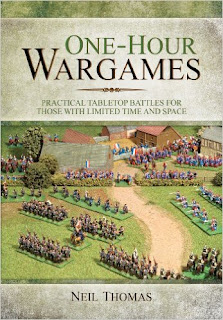 I’ve been dipping into Neil Thomas‘ One Hour Wargames book over the weekend, looking at the rules for Pike and Shot Renaissance battles, together with the accompanying scenarios and campaign notes. I dismissed the rules as overly simplistic when I first read them a couple of years ago but, with the rise of 2/3mm as a viable wargaming scale I’ve been having second thoughts. This has linked in with my Wings at War projects, as I’ve been looking at 2mm stuff for ground targets and terrain.
I’ve been inspired by the likes of Mark Backhouse and Sidney Roundwood, who have both achieved some quite extraordinary things in tiny scales, especially the Siege of Portsmouth show game that Mark exhibited last year. Not that I’m about to embark on anything like this any time soon but the attraction of large armies for minimal cost and especially time is really quite attractive, with potential for a linked campaign of scenarios based on the extensive list in the One Hour Wargames book.
‚For those with limited time and space‘ it says on the cover, so I think the rules are definitely worth a closer look given my recurrent lack of either, not to mention my limited budget!