Only a days entertainment Monsieur. Vendee 1794.

24. November 2018Blogs INTComments: 0
A Sharp Practice 2 encounter, Vendee 1794.
The day was warm, the men were tired and wary so the Republican column under Capitane Soulem approached the village of Roslam with caution. It had been reported to the Capitaine that the Vendee royalist scum were active in the area and that they had vowed to free the captive Mayor of Roslam Monsieur Paul Cezanne (yep!) who accompanied his column. The guillotine had been set up in the occupied village some days ago but it had been abandoned last night when the rumours of rebel activity had spread.
His men were nervous he knew it and maybe with reason, they were not after all the best disciplined soldiers he had ever commanded. Curse this damned revolution, he was a professional for gods sake leading untrained amateurs, they elected their own sergents. Elected, merde!
At least he had a dozen or so light infantry, not too bad those lads, but the nine chasseur troopers were the dregs of the earth, their pickets had fired at shadows last night and the ten others had jumped onto their mounts and ridden off into the night never to be seen again, the remaining troopers and their marechal des logis (sergent) were out in front now just looking for a chance to bolt he was sure.

A view of Roslam and it’s approaches. 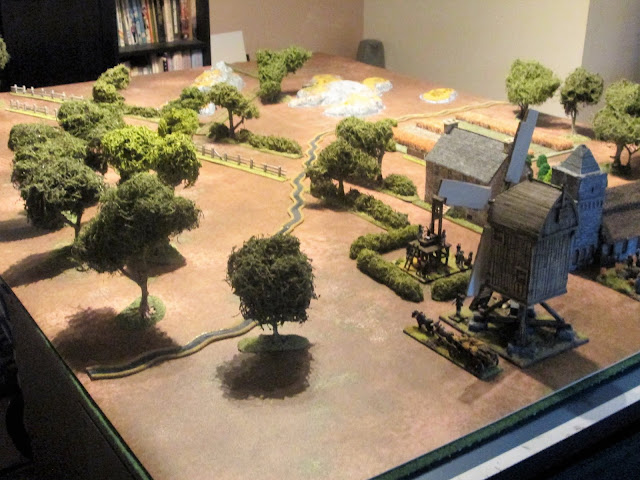 More views of the village with the guillotine in the square. 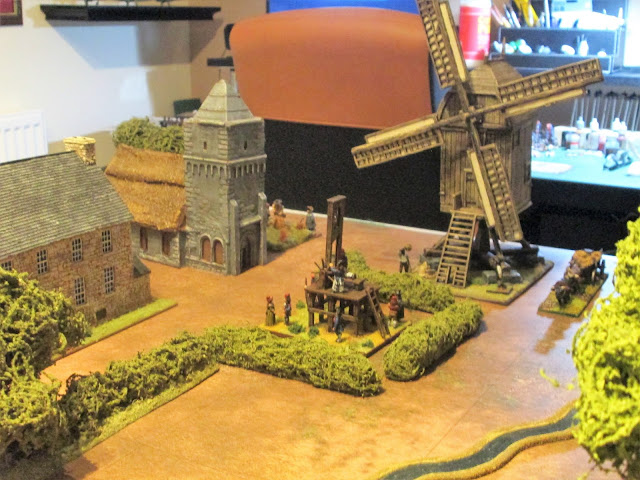 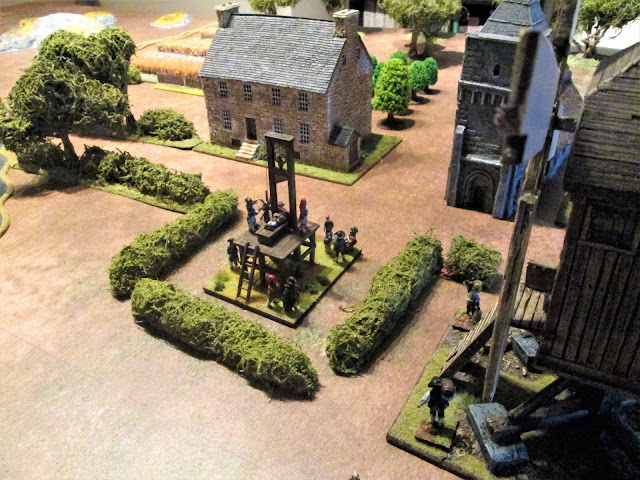 The Republican column can be seen marching down the road, chasseurs in front and skirmishers protecting the flanks, Capitaine Soulem accompanies the main force and the mayor of the village with his wife and servant are seen under guard. 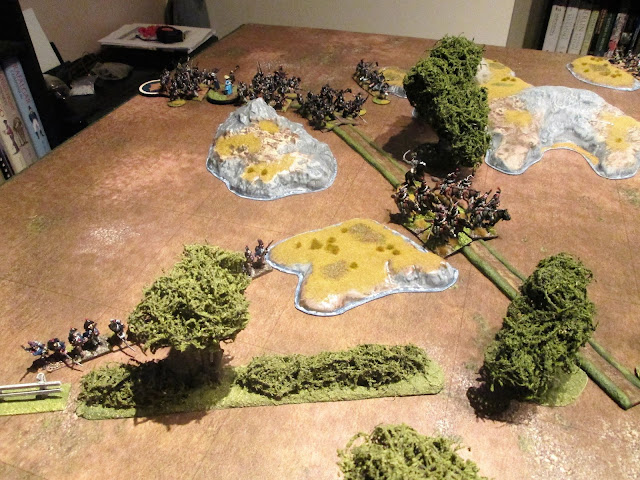 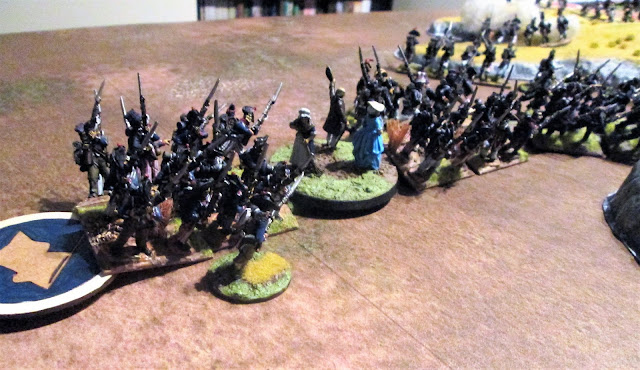 The column moves on. 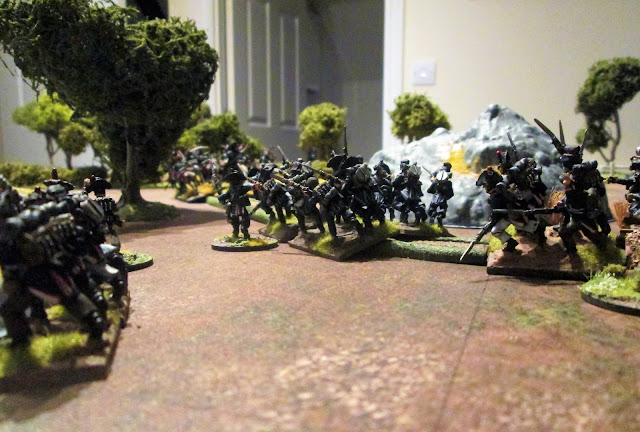 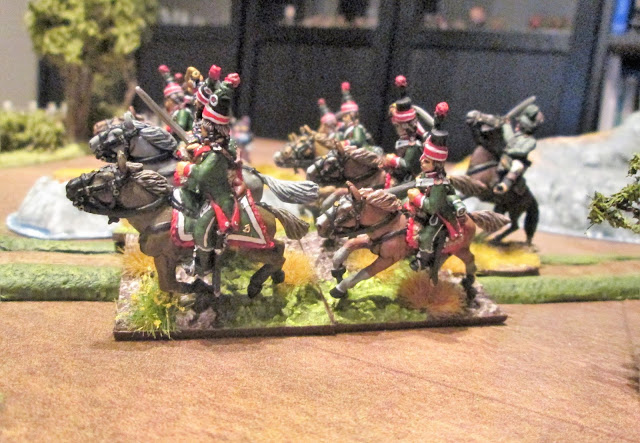 A shrill call from the marechal des logis of the Chasseurs alerts Capitaine Soulem to the sudden presence of armed men in the woods across the road from the cavalry, immediately after which the skirmishers to the Capitaines left shout of enemy to their front. How did they get so close! 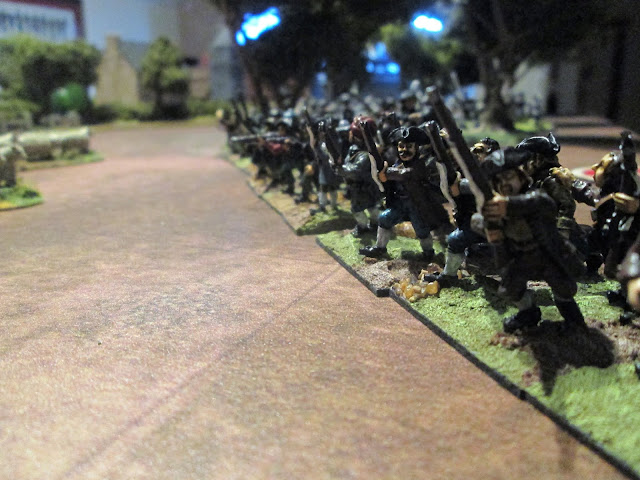 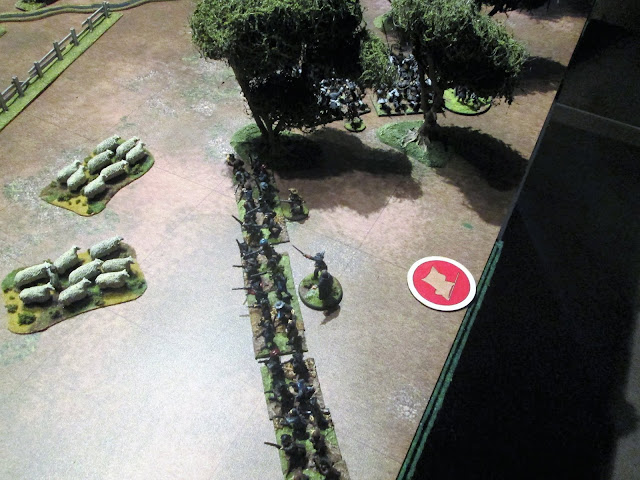 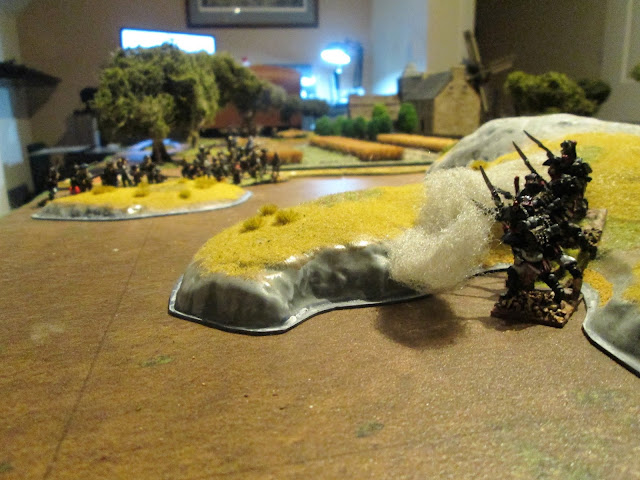 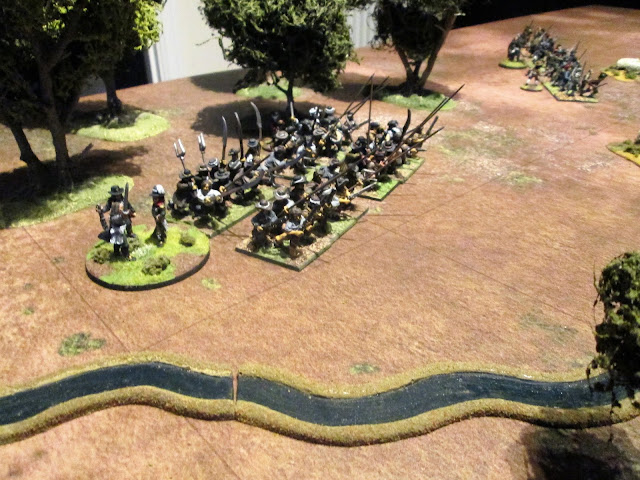 Orders were given for two groups of Republican skirmishers to line the fence row on the right flank of the column but sustained (if uncontrolled) fir from the musket armed peasants in front of them soon drove off one group and left the other crouching by the fence. 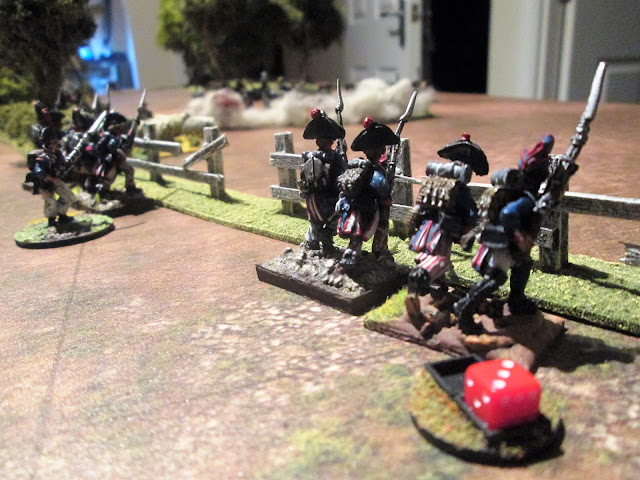 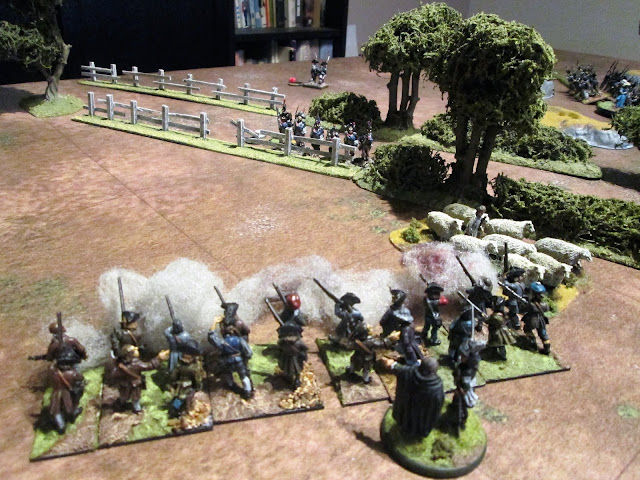 The gallant – ha – Chasseurs meanwhile swung off the road to their left, were fired on by one group of rebel musket men, turned their horses round and bolted for the rear. The plan if he had a plan was not going well for Capitaine Soulem! 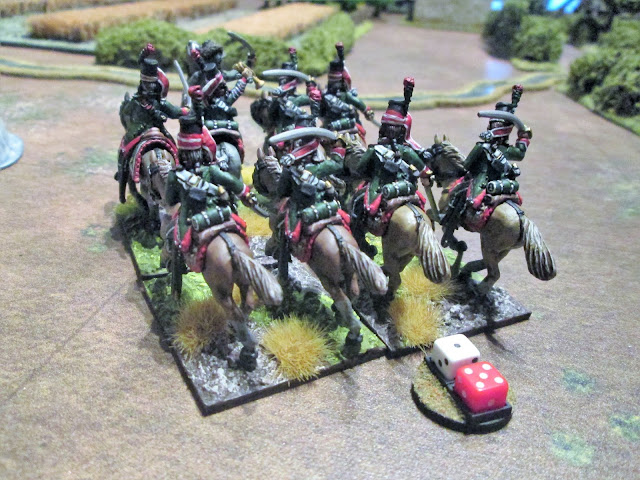 All was not lost however, the bold and reliable light infantry Chasseurs were ordered to retrieve the situation. „Charge my children, charge the scum to your front behind the six foot hedge. I know they are ready with first fire and you will loose half your assault dice due to melee across an obstacle, but do you give a shit about that?“ Damned right they did, three dead and five shock. Buggered off didn’t they! 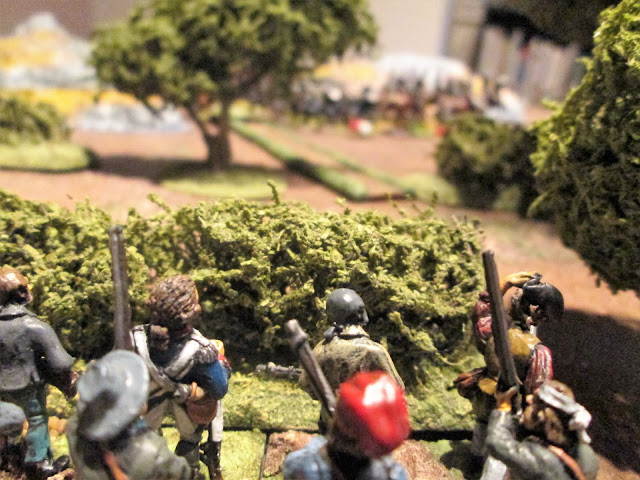 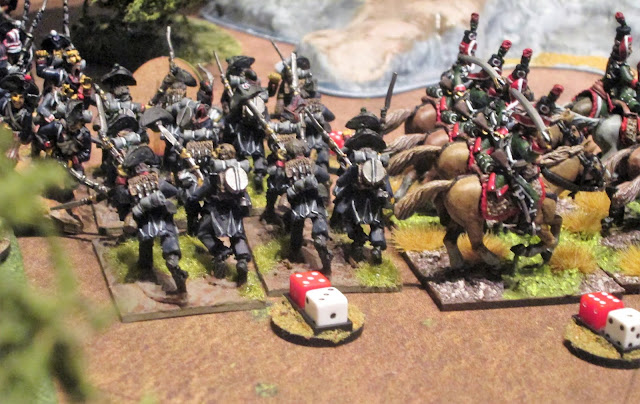 Vendee peasants led by Monsieur Alexander Dumas (yep that’s right) level three leader, can be see crossing the first of two hedges in order to flank the approaching Republican column. These boys are armed with various poky things or as the rules stat, Big Choppas! 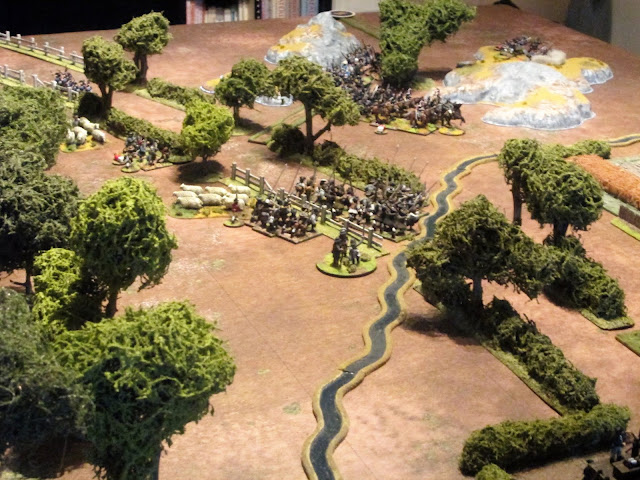 Another view, this time from the Republican side shows the ever so brave light infantry Chasseurs heading back down the road towards Paris as fast as their blue clad legs could carry them, while the remaining two groups of line infantry think it may be best to form some sort of a line and blow these enemy suckers away. The mayor can be seen sniggering away in the background. 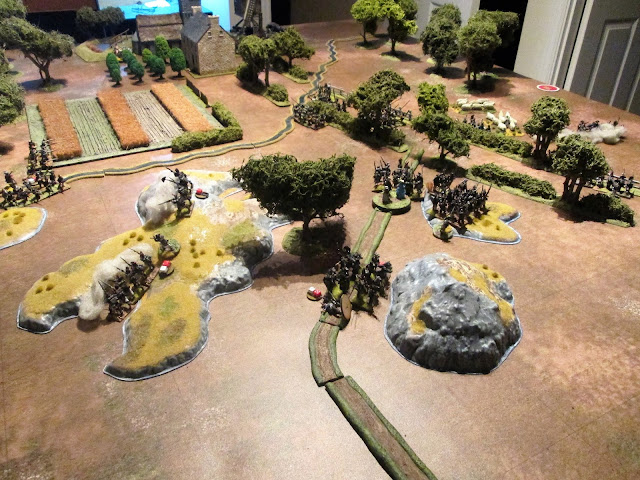 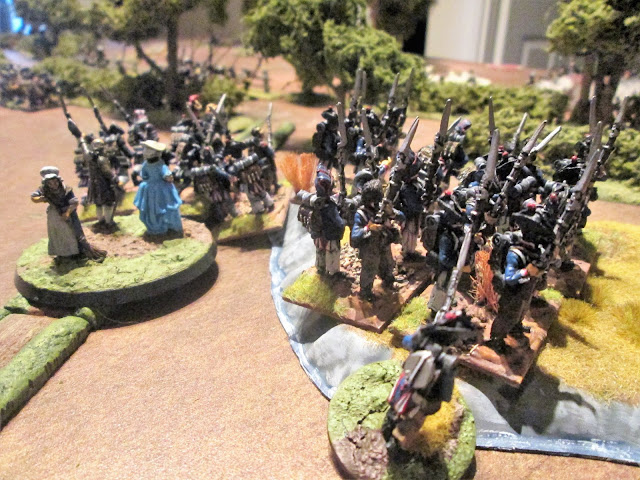 Les Blues line the hedge but the boys with the big choppas are on their flank – at least it’s not their rear! 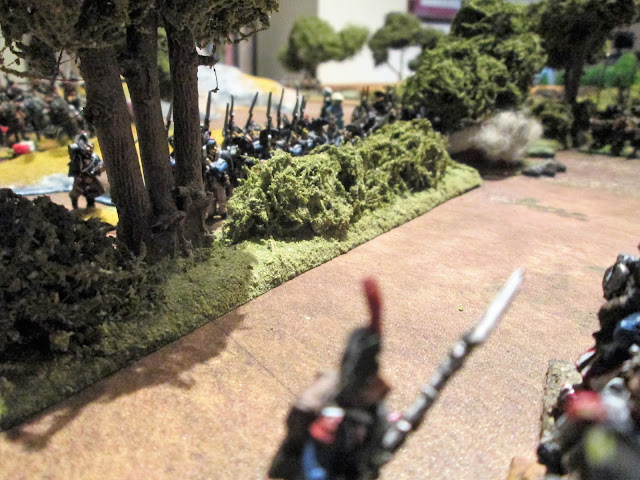 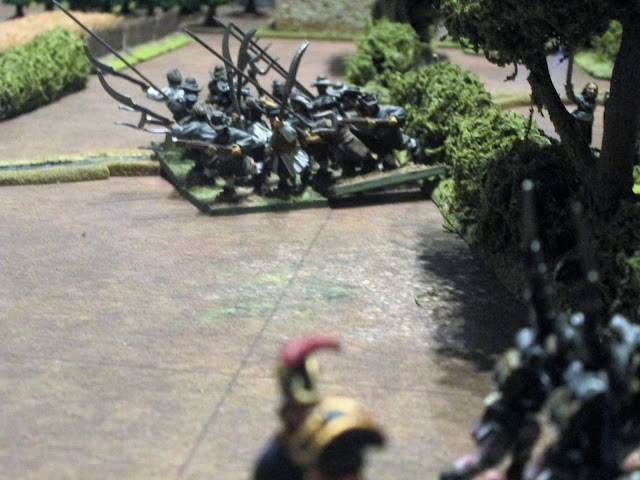 The inevitable poo hits the fan and in an impressive Fisty cuff melee the Republicans not only come off worse but in all of the confusion Monsieur Cezanne the mayor scrambles through the blue coated ranks and into the safe hands of his royalist mates. He later went on to dabble with paints I believe. 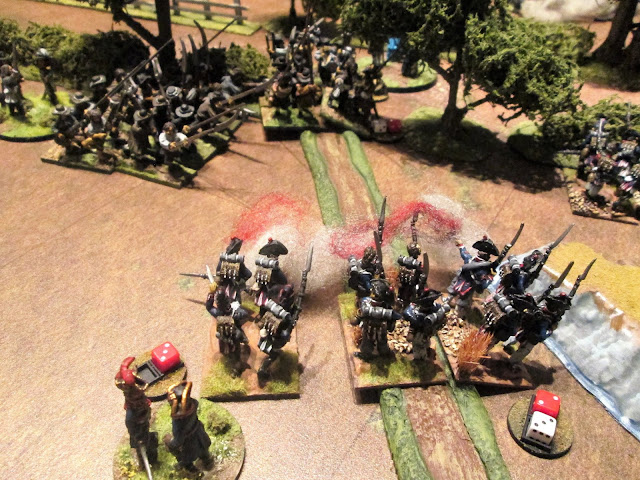 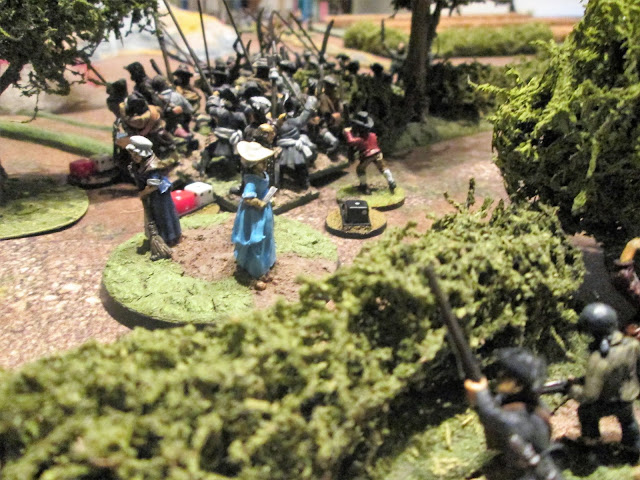 A final view of the field of battle with that painter chap rescued and Royalist cavalry coming to bear him to safety, if only those pigs would get out of the way that is. 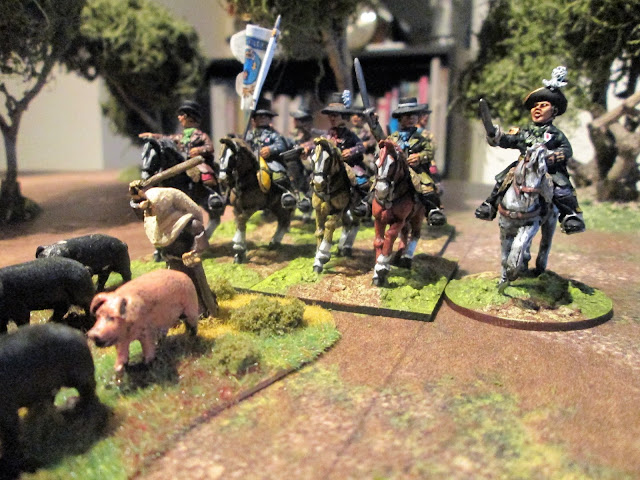 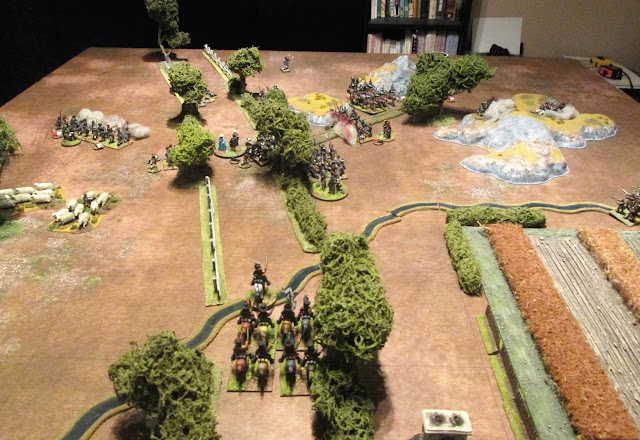 A cracking game, Sharp Practice 2 of course but a little different this time. Both sides were pretty trashy troop types as would be expected during the early part of this period but Neal and I were particularly impressed with the rules ability to show that with lots of low grade leaders (most were level one sergents) neither side could rally off shock or get many troops moving at once. Control was almost non existent which of course it should be in a situation like that and once units had been in contact with the enemy for even a short period of time they became almost impossible to control. These rules just get better and better. Great stuff and I hoe you enjoyed the write up as much as we enjoyed the game.
Dave.