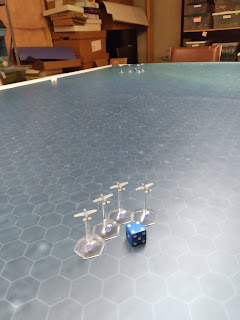 The hard copy of Bag the Hun arrived earlier this week,  and having more than enough USN and IJN aircraft painted, I thought I’d try the introductory scenario at the back of the book and roll some dice!

Somewhere over the Pacific, September 1942:

Lt. Jack Robinson leads Blue flight from VF-9 at 10,000 feet on a sweep over the Pacific, searching for threats to the Carrier group supporting operations in the Solomon Islands. He was a veteran of Midway and Coral Sea and numerous other skirmishes, with an impresive number of Rising Sun flags painted below his canopy. His wingman to his right, Martins was solid. On his left, Chuck, a seasoned pilot with a kill to his credit lead the second section with their New Kid fresh from flight school and on his first Deployment.

Scanning the skies he sees the flash of sunlight on canopy high above and ahead of them. „Bandits 1 o’clock high!“ He turns towards the threat and begins climbing to intercept.

The bogeys were turning to get the sun behind them before they swooped down to engage. Robinson pushes the big Pratt & Whitney radial engine as he seeks to negate the enemy altitude advantage.“Japs dead ahead!“ Martins shouts, causing some excited chatter.

„Alright boys, keep calm“ Robinson growls. Looking over his shoulder he notices Chuck and the New Kid straggling. „Close it up back there“ and he throttles back to let them regain formation before they close. 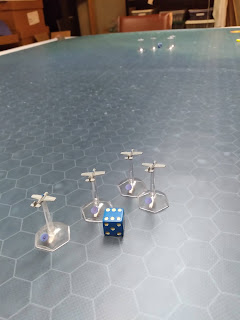 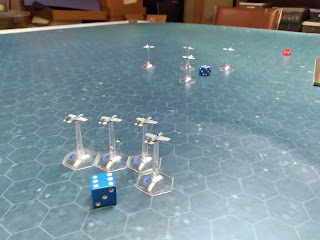 Eager to get to grips the Japanese Zeros swarm in, not worrying about formations but trying to get out of the American guns and gain superior tailing positions.

„Holy shit!“ yells Chuck as Zeros flash by so close he felt he could’ve reached out and touched them.
„Break! Break!“ orders Robinson, and he pushes his Wildcat into an Immelman, the big engine screaming in protest. 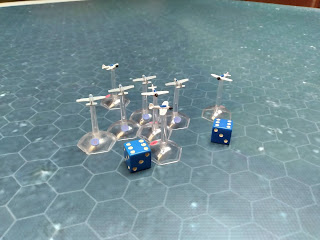 He drops in behind the Japanese flight leader only a 100 yards away and gives his target a long burst. The Zero explodes, flaming wreckage falling into the blue water far below them.

Chuck also pulls an Immelman and takes a deflection shot at a Zero going after Jackie, but the agile fighter jinks out of the way.
Martins does a wide loop and squeezes off a burst but one of his .50 cals jams!
The New Guy doesn’t keep up with Chuck and flies out of the fight. 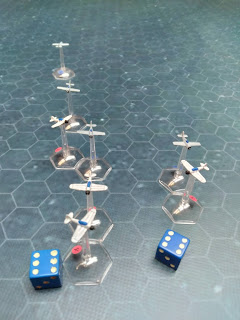 As the ball of flame from his kill dissipates, Robinson sees another Zero, also a novice pilot on his first deployment, wander into his gunsights.

„Jeez, this is too easy“ he mutters as he squeezes off a deflection burst. His second victim explodes into a fireball. 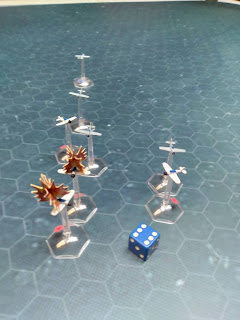 „Jackie! on your 4 o’clock!“ Chuck shouts. Robinson whips his head around as bullets rip through a wing, breaking an aileron cable. 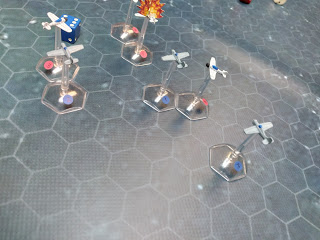 Chuck lines up again on his target, squeezing off a second burst and this time his bullets hit home, blowing the Zero into flaming pieces.

Martins also gets another shot, but with some of his guns jammed the results are weak. A few bullets hit the cockpit though, wounding the surviving Japanese pilot. 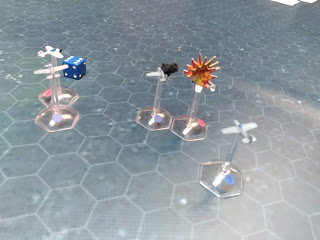 The lone Japanese pilot, wounded, dazed from seeing the rest of his flight suddenly explode, turns for home and spots the lone, inexperienced American far away from help.

The rest of Blue Flight begins looping around to get the Zero before it can escape.
The New Kid gulps as he finds himself heading towards the enemy all on his own. 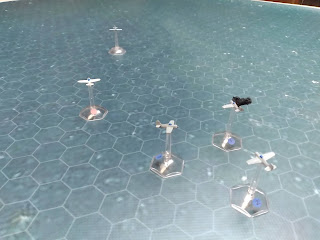 The Japanese pilot angles in to get some small revenge.

Robinson spots the danger. „Watch out Kid!“ He puts his Wildcat into a barrel roll, straining against the damaged aileron and loops down out of the sun, guns blazing.
The remaining Zero explodes in another fireball! 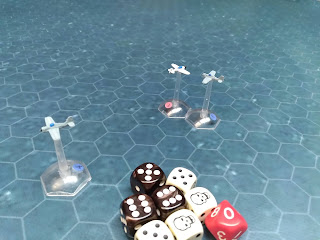 Scanning the skies for any other threats he sees they are safe. „Ok boys, close up on me. Time to go home!“

Well, that was pretty exciting. A Top Ace, getting multiple opportunites to move and/or shoot can really dominate the action.

The American weight of firepower versus the low robustness of the Zero and the close range of the shooting was very telling as well. Plus Lt. Robinson having a habit of rolling 10 every time he fired didn’t help the Japanese either.

As I suspected, the card activation makes this game very solo friendly unlike other games such as Check Your 6!, which may be crunchier with technical detail but involve pre plotting.

Next I will set up something a little bigger involving trying to escort/intercept some dive bombers.

« Neuer Nutzer-Rang: VeteranFomorians of Erin some new pictures of a project »
➤
Anzeige: