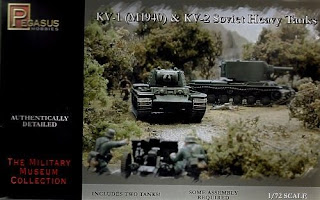 This is definitely the last of the Russian AFV kits that I will adding to the What a Tanker! project, otherwise it’s going to get a bit silly. I have no real use for either of these early war heavy tanks but you can’t really have a WW2 Russian tank collection without a KV-2. That’s my excuse and I’m sticking to it. They weren’t very common but did make quite an impression when the first appeared, especially due to the virtually impervious armour.

The fact that you get one of each in the box rather than two of the same is what persuaded me to order a set, as well as the fact that I like the Pegasus EZ Build kits for their level of detail and straightforward construction, even if they are a bit more expensive unless you are prepared to shop around. This kit wasn’t too much of a stretch and the free postage helped to soak up the price tag.

I suppose I could do some more early war Russian tanks like BT-7’s and T34/76’s…no stop it!