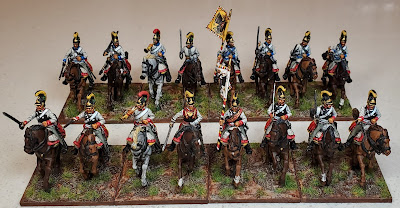 These figures are from a box of plastic Perry Austrian Cavalry and a command sprue to make two 8-man units. The set comes with options to build Cuirassiers, Dragoons or Chevauxlegers; as well as heads with helmets for 1798-1805 with smaller woolen crest and queues, 1805-15 with tall woolen crest and 1805-1815 with woolen crest removed.

Since most Perry Napoleonic cavalry plastic sets come with 14 figures, adding a command sprue with officer and musician allows for these two 8-man units. Granted, most folks like 12 figures for standard size cavalry in Black Powder, but I’ve gone with 8 figures for a few reasons. One reason is they take up less space on the usual 8′ X 5′ table to I play on; and another is they paint up faster (and cheaper). 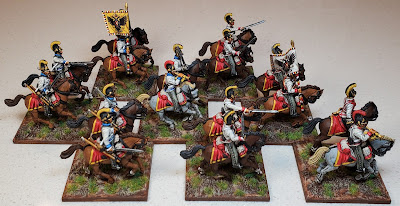 Speaking of painting; these were painted in my usual way of block painting and staining with Minwax, and highlights added afterwards. The horses were base coated with rattle can spray paint – two shades of brown and white (for the musicians). 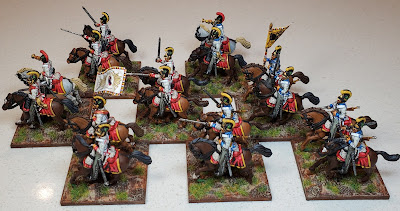 It’s great that the Austrians used the same saddle cloth for their Cuirassiers and Dragoons. In fact, I’m really starting to appreciate their take on uniforms – simple, yet elegantly styled uniforms, mostly in white with colorful facings. 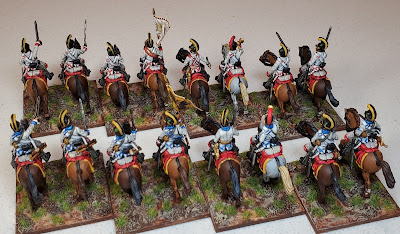 Well, these figures are the last of the Austrian token force…for now anyway. Mounted high command and artillery may be added later, but for now other projects are waiting in the queue. One is the Perry AWI figures sitting in trays and base coated weeks ago. On the gaming front, my buddy and I plan to host our Imjin War naval game this coming Saturday at the Chehalis Veterans Museum. This is a privately-funded museum and very impressive. A must-see if you’re ever in the area. Thanks for stopping by and wishing you all the best.