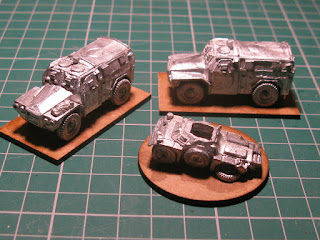 I got round to assembling the QRF Humber Pigs this afternoon, once I’d cleared the decks of work and had time to sit down and sort them out. They are typical QRF, a bit rough round the edges but the only deal in town as far as mid 1960’s British Army Cold War kit is concerned, so I had to bite the bullet and just get on with it. The castings are pretty rough with one having a miscast wheel arch to make matters even more enjoyable but underneath all the seams and flash there’s definitely a Humber Pig or two in there, oinking to come out. 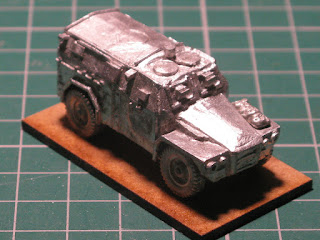 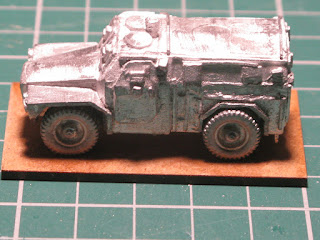 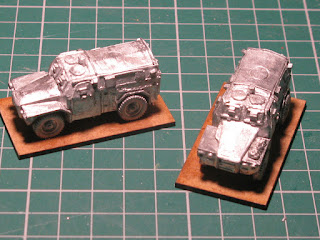 I replaced the white metal axles with steel rod and pre-drilled the wheels so that they stayed attached. I also left off the riot bars, as these are battle taxis not internal security vehicles, although having said that they really should have the flashy blue lights removed and a pintle mounted Bren gun added instead. The end result isn’t too bad but, after my recent experiences with less than fantastic QRF quality control, I’ll be sticking to Peter Pig and Command Decision from now on. 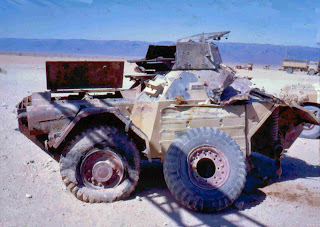 A case in point is the Ferret scout car that I ordered along with the Humber Pigs, which I realised had a miscast engine deck after I had cleaned up all the other components. I was about to bin it, when I remembered seeing photos of more than one mined Ferret armoured car in the Radfan, which not infrequently had their front wheels blown off by IED’s or Soviet anti-tank mines. This was a pretty common hazard and would be a good hook for a scenario, perhaps involving an ambush, a medevac or a vehicle recovery under fire? 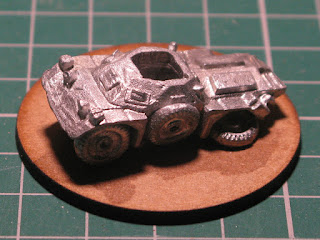 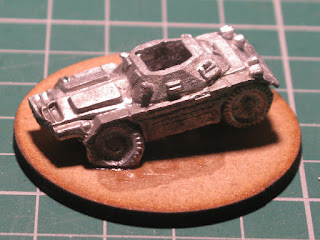 To save the model and make use of it, I chopped the back axle into bits and glued it back in place so that it looked a bit like the photo, only in reverse if that makes sense. I added a floor to the crew compartment and glued the whole thing onto a circular base. This will be modelled with a blast crater and possibly some more scattered vehicle bits, so that it looks the part of a wounded, if not deceased Ferret. I’m quite pleased with the end result but not with QRF for supplying a wonky model in the first place.