Piquet and The Italian Wars in Olicanaland 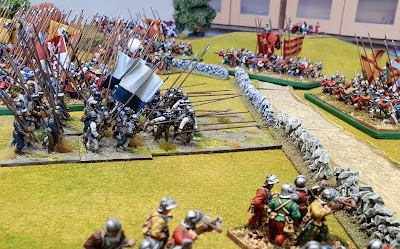 Last week I had the pleasure of popping over to see James and his Italian Wars collection in nearby Olicanaland. Many of you will know of James work through his blog http://olicanalad.blogspot.com or one of his cracking display games round the shows.

It was a great opportunity to a) see James collection close up b) have a go at Piquet rules c) get my small Italian Wars collection on the table d) meet up with a fellow gaming blogger.

On my arrival after a quick brew and chat we went to James‘ games room where he had set up a table and a couple of forces with space to add in my Swiss Pike Block and my two Gendarme units.

I had the option of either Pike and Shotte or Piquet for the rule set, regular readers will know I’m no fan of PanS and the Black Powder derivations. Piquet however is one of those rules I have never tried, I recall seeing them in action many years ago at the old Triples Show in Sheffield Octagon and wondered what they were all about, so why not.

The rules are based around opposing die rolls and Card based activation, both concepts I am used to in other sets, having played toofatlardies games and nicked the card activation idea for my own sets of rules I am more than comfortable with not being able to do exactly what I want when I want, something I know would put some off these rules (as they do with the lardies sets).

Each side has a command dice, either an 8, 10 or 12 and these are rolled against each other to determine initiative. Each side then determines their card deck which is based around how good the army is and can include army specific card (e.g. a Swiss Melee +1 card) for a total of 29 cards. 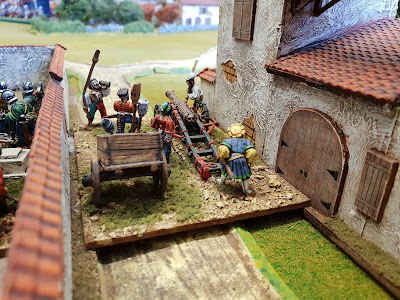 Other cards include Melee Resolution, Artillery Action, Swift Troops, Free Action card and the Lull card, more on this shortly.

At the start of a phase each player rolls their army die, the important stat being the difference between the two, so if both have a d10 and Player 1 rolls 8 and Player 2 rolls 4, Player 1 wins the initiative by 4. Both players then take the top four cards from their deck placing them in order face down in front of them. Player 1, with the Initiative plays through his 4 cards before passing the action to Player 2 who then plays his 4 cards, then for Initiative again with the winner taking the difference in cards…. and so on.

The only break in that sequence is the Lull card, when this is drawn the players roll off their army die and if the player without the Initiative wins he gets to play a card of his own (from the top of his unused deck). A drawn Initiative ends the turn and the decks are reshuffled and start again.

I had heard some horror stories of people sat there for hours in Piquet whilst their opponent won initiative but in this version you are a maximum of 9 cards from playing again and more often than not is 3 or 4. The advantage is, if your opponent has a run of 9 cards, you have a run of 9 cards after they finish. I really liked the system.

However when you don’t have the Initiative you don’t just sit there, this is where the opposed die roll comes in. Each time you move, fire or fight your opponent has a die roll against you, mostly a d8 but sometimes dependant on troop type. So using the movement a big difference between die rolls could see your unit moving multiple times (this is in Hail Caesar too, thought I recognised it ! Piquet miles ahead of its time !).

Added to the die type units can have their own characteristics Fierce Stubborn etc (again a bit HC ?) The hardest thing to get my head round was the shooting, not because it was too complicated but basically because you could shoot at any time (so long as you are loaded) I found myself forgetting this and only remembering to shoot on a reload card. To explain further the „reload“ card allows any unit that has fired previously (marked with the cotton wool ball in the photos). So with a unit that hasn’t fired it could fire, reload and fire again on one card being unloaded at the end of that card.

For a first time play through I really enjoyed the game, even though there was a moment of statistical madness that lost me the battle, more later.

My force had a small command of Stradiots which I set up on my left, followed by a command of three Swiss Pike Blocks (including my very own Canton of Lucerne block) and a small shot unit. This was placed opposite a large open field with a walled boundary.

In the middle I had a command of 4 French Crossbow units of dubious quality. These set up in the small village in my centre with my 2 cannon. To my right by the large open area I put my 2 Cavalry Commands including my Papal and Borgia Gendarme.

James had a similar Light Cavalry Command opposite me and they spent all day skirmishing with each other on the flanks. Opposite my Pike James had 3 mixed Pike and Shot units. On his far left opposite my Cavalry was two Pike Blocks with Shot support, in the centre in reserve James placed his Heavy Cavalry which never really got into the action.

My Cavalry did a stirling job and with limited subtlety they were able to out flank and see of the pike blocks and sweep across the field to the middle where unfortunately things hadn’t gone well. The Borgia Gendarme played a blinder taking out a Pike Block, a mixed Pike Shot unit and a unit of Cavalry before finally running out of steam, a unit citation clearly earned.

My Swiss Steamroller move in the centre went quite well to begin with and we rushed forward to engage the enemy foot, unfortunately that was where the luck ran out. James had a run of 4 reload cards in a row (1 in 25000 !) Shooting holes in all my Pike Blocks, I gambled all my morale chips on reducing the casualties and disruption but what ever I did I just couldn’t get into melee, where with Swiss I stood a real chance of success. It wasn’t to be and the Pike broke just as my Cavalry attack ran out of steam. One card from victory, that’s my story and I’m sticking to it !

So thanks James for a great game, I will certainly try the rules again with the YG group when we get enough figs done for a game.

Back at YG our 15mm Napoleonic Battle of Albuera is still ongoing, Report soon(ish)