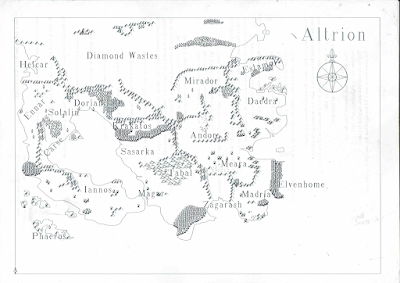 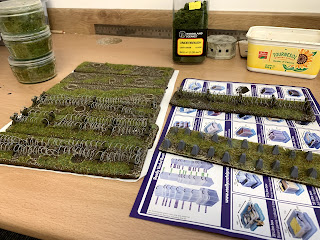 Today I’ve finished re-grassing the Omaha Beach boards… didn’t think you’d really want photos as if you aren’t fed up of the process by now, I certainly am 😀

Also tarted up the Flames of War obstacle and barbed wire sets I picked up at Campaign. Just, you know, to make life harder for the Americans than it already is.
The car is packed. I’m sure I’m missing something 😀
You will also notice on the left a stack of pots of basing grass, aka the stuff I’ve shaken off the boards once done. Should last me a while.
I’ve also been playing with Wonderdraft, a rather fabulous mapping program that runs on Windows, Mac and Linux. It’ll import existing maps and allow you to keep them as a tracing layer, or let you draw your own, with a wide range of symbols for everything from continent down to city-scale maps.  I was actually using it to produce a better version of the map for my old D&D campaign, but I could also see it being useful for (say) Sharp Practice campaign maps etc.
For those of you who missed it on Twitter: