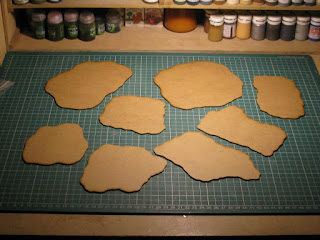 I have had a bit of an avalanche of stuff arriving in the post, much to the annoyance of SWMBO, who has now banned me from ordering anything more until after Xmas. I pointed out that I haven’t actually bought that much and haven’t spent much either, but to no avail. Anyway, I have more than enough stuff already to get on with the Sandbox Skirmish project amongst other things, so it’s not a problem. I also have lots of other projects in the pipeline for which I am fully equipped, so ‚Bah Humbug‘ to her indoors! (just don’t tell her I said that). 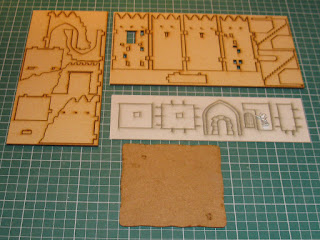 First up, the road sections and terrain templates arrived today from Supreme Littleness Designs. The road pieces will take no time at all to texture and paint, so that I can have a whole network of dirt tracks for the 15mm armoured vehicles to patrol along, with some of the templates possibly being used for stream sections or dry ditches as well, if I have enough. I also now have a 15mm version of the desert ruins that SLD produce in 28mm, albeit actually an 18/20mm version. I think it scales really well with the Peter Pig figures, however, so a big thank you to Michael for re-scaling and cutting it for me. Brilliant! 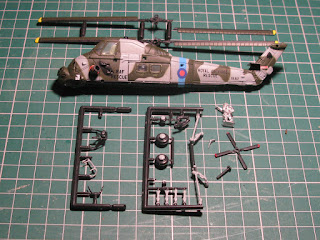 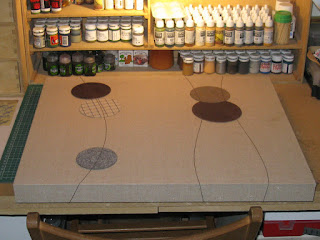 The 1/100th scale Italeri Westland Wessex diecast model helicopter also arrived at the same time, albeit with one broken rotor blade that I will need to fix and reinforce so that it doesn’t snap off again. It wasn’t obviously broken when you looked at the packaged model, so it’s not the sellers fault that he missed it. I’m sure it will be fine once I’ve sorted it out. I also found another box picture frame in the charity shop this morning, so now have a smaller terrain board to texture and paint being only 55cm x 47cm in size, so I think I may prepare it either for my 10mm Aliens project or for 10/15mm French Indochina games.
Blimey!