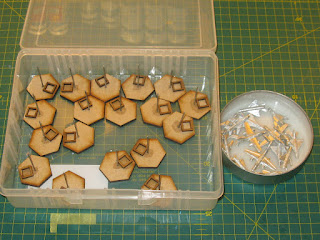 I decided yesterday to de-base my 1/600th scale modern aircraft that I will be using for the Target Locked On! Flashpoint Baltic project. These were based on mdf hexes with wire stands but weren’t ideal as they required the models to be drilled and glued to the wire, which proved to be difficult due to the very hard allow used for the Oddzial Ozmy models. This meant that drilling the holes was time consuming and some of the aircraft ended up coming unstuck.
I’m now going to switch to magnet basing for the modern aircraft which I think will be a better solution and will allow me to swap out the bases for hexes or squares, as required. The original bases won’t be wasted, however, as I’ll be recycling them for the 1/600th scale Tumbling Dice Cold War planes that I’m adding to my existing Target Locked On! Flashpoint Taiwan collection, which are based in the same way.
The Tumbling Dice models are cast in a much softer alloy, are easy to drill and stay stuck on the wire stands, so I might as well carry on using the method that I have used thus far and save myself some extra hassle in scratch building a load of new stands. The recycled ones will be used as bases for either some Soviet fighters and fighter bombers or for some Royal Navy carrier aircraft, although I’ve yet to make up my mind about which one I want to go for. Any suggestions?