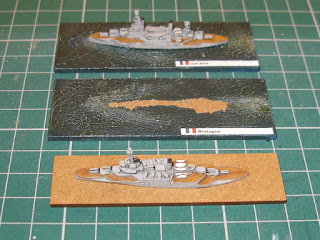 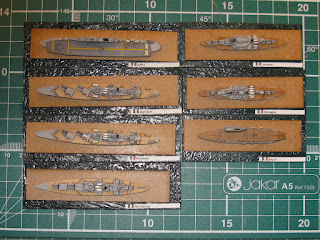 I’ve decided to re-base all of my 1/3000th scale WW2 French fleet, so that they match the blue sea cloth that I now have and so that I can magnet base the whole lot for storage. I’ve never been happy with the sea texturing or the colour of the bases that I originally used, which were designed to fit the club Victory at Sea basing conventions, and much prefer the 20mm wide version that I’ve been using on my 1/2400th scale ironclads.
I’m starting with the capital ships and aircraft carriers, which I’ve removed from the original bases, sanded down and matched up to new 20mm wide ones. The hulls will then be marked out on pen and acrylic paste applied and textured, so that the bases can be painted before I glue the ships on to them. I’ll then be able to add wakes, bow waves and name labels, once the ships are in place. I’m hoping that this won’t take too long but, as it’s half term, I have plenty of time to get on with it.