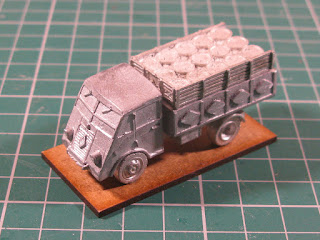 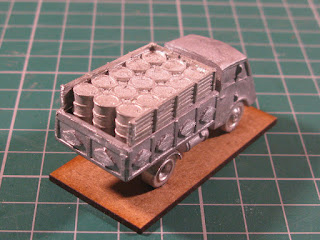 No, not Star Wars but a clapped out old lorry for my rebels to smuggle their arms through the British (or French) road blocks, assuming the usual camel convoy doesn’t get there first. I figured that as I’ll have a road block checkpoint for the troops to operate I would need to have some rebel vehicles to be stopped and searched.

A quick rummage in the lead pile turned up this Peter Pig French WW2 truck, to which I retrofitted a load of barrels, pinched from a Skytrex Vietnam truck which has long since been converted into an AK47 technical. I quite like the resulting mash up and it will definitely be used for a scenario at some point. I reckon they could squeeze an entire fifteen man squad into there!