10. Juli 2017Blogs INTComments: 0
The observant among you will have noticed that I’ve been using this Games Workshop hill a lot: 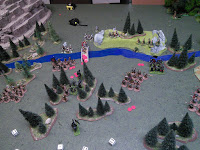 I would never buy an overpriced Games Workshop terrain piece. I actually got it for free because some one’s cat had clawed at the flocking. It was pretty simple to repair. But I like it, the jutting stones are suitably dramatic and fit my mental image of New Zealand Middle Earth.

I do have other hills however. I made these hills many years ago: 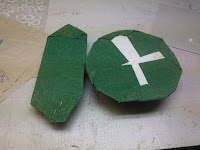 As you can see I made them by folding grass paper over expanded polystyrene. The big conical one was the base of Mrs. Rabbitman’s and mine wedding cake actually, which gives you an idea of how long I’ve had it. As you’ve probably figured out by now, the slopes are way too steep and both hills are rather unusable. So big dramatic hills like Weathertop have so far eluded me.

Ripping the grass paper off and hacking into the slopes would reduce the size of the hills to an unfortunate degree. Fortunately I’m a cheap bastard and didn’t throw away these big hunks of foam.

Then I thought „Hang on, how about gluing chunks of off cuts onto the slopes“ because again I’m a cheap bastard, and have a couple of boxes of off cuts from my NW Frontier hills.

An extended evening of carving and gluing chunks of foam gave me this: 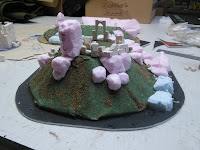 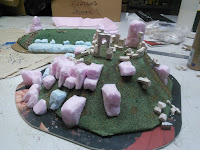 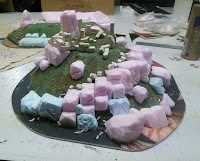 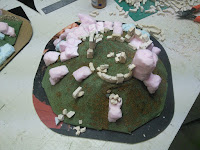 After sitting for 24 hours I expended a tube of caulking filling in all the cracks, gaps and crevasses. I then liberally scattered the gritty mortar that comes with the bricks over the wet caulk.

The mortar is supposed to be mixed with water so I misted everything with a spray bottle and surprisingly little shook off after they sat and dried for 24 hours. The grit helps the chunks of foam blend into the ground better.
To help the grit stick even more everything got a good coating of watered down burnt umber and then all the rocky bits were liberally splashed with black. 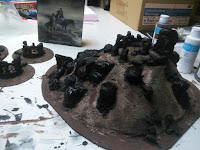 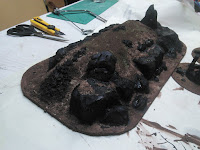 Then I dry brushed tan over the brown and successively lighter shades of grey over the stones. 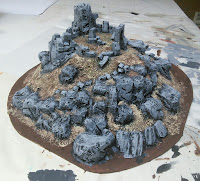 To flock these big pieces, I painted the glue on in wedges and poured the flock on before it could dry before moving onto the next wedge.
After letting the glue dry overnight and then knocking off the excess, it was time to add flower tufts, grass tufts, clump foliage, bits of dried lichen and clumps of long grass to add some variety and interest. I think I used just about everything in my scenic basing stores. I tried to be mindful of where figures would stand and keep those spots clear. One thing I realized with the Army Painter flower tufts is that they peel off in some large irregular shapes which are nice for doing flowers spilling down a hillside or over a rocky edge. 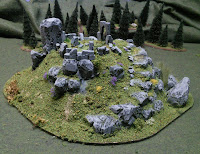 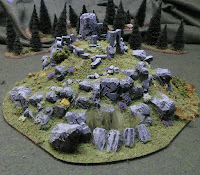 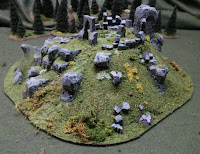 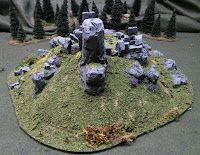 I also did a couple of ancient wells while doing the hills to help set the mood. I’ll keep one and give the other to the Mad Padre.
Now to see how they look with troops fighting over them: 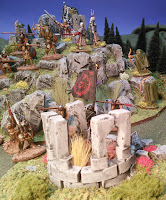 I’m feeling pretty pleased about how they came out. The oval hill has a minor warp, but not enough to be a nuisance once it’s placed on the felt.
I think my next game will involve some very hilly terrain!