2. März 2018Hersteller ENComments: 0
The 15mm scale awesome Sengoku Japanese Fantasy range at Alternative Armies sculpted by John Bell is getting its own game system this month!  That’s right a skirmish level set of rules for up to four players or solo play.  It is called Sengoku Monster Hunter and it is written by Steve Danes (he of the Furioso system).  Create a ‚Hunter‘ and their skills and followers and then seek out and hunt mythical creatures of Japanese folklore gaining experience and adventure along the way.  Monster Hunter will be fifty two pages and available in print and as a digital download too.  Simple and easy to learn mechanics as well as a great ‚monster marker‘ system which keeps your hunters on their toes. Want to hunt Oni?  Want to battle with Kappa and Skeletons the bestiary of more than twenty five creatures makes it all possible! 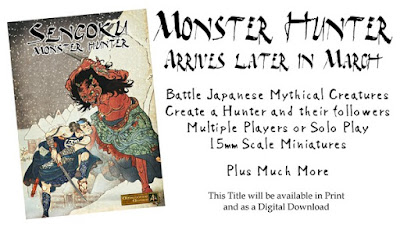 The book is ready and will be released in the last week of March.  We will give full details at that time including contents and views from the author.  The cover art was created by the talented Sam Croes.  It will be HERE on our website.  Today though we are pleased to release a new pack for the Sengoku Range which is ideal for the miniatures and the Monster Hunter game too.  Here are the details. 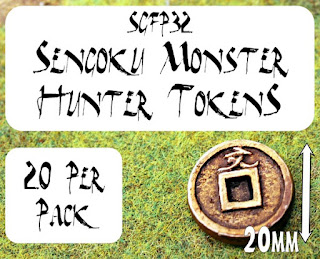 SGFP32 Sengoku Monster Hunter Tokens
This pack contains twenty identical tokens for use as game currency or as monster reveal tokens or as bases for your miniatures.  Sengoku Monster Hunter tokens are 20mm round and are very useful in that you can use them as 16th century Japanese coins or as counters in play of the Monster Hunter game (revealing creatures, just put a number on the underside to keep track) or as a base for your Sengoku or other miniatures as they match the 20mm rounds we  put our own painted figures upon.  For a full range of monsters you will need two packs but we offer 10% off if you take three packs (60 Tokens). Go HERE. 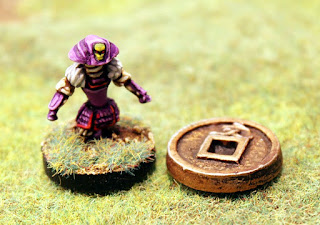 Here is a picture of the new token next to SGF93 Armoured Demon Monk for scale.  You can also mount your miniatures on these 20mm round tokens.
If you would like to be informed personally when the book is released all you need to do is send an email to sales@alternative-armies.com titled ‚Monster Hunter‘ and we will tell you on the day.
Thanks for Reading,
GBS