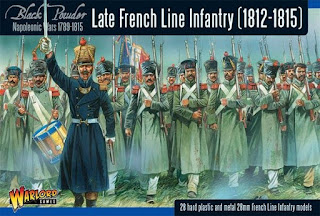 A game of Napoleonic Sharp Practice is being put on at the club next week and, in an idle moment of lapsed resistance, I suggested that I might be interested in taking part, were it not for the fact that I’m already booked in for a Cruel Seas game.
No sooner had I posted my interest on the club message board, than I was mercilessly prodded from various directions by the club Sharp Practice enthusiasts, with tempting suggestions about a French force in 28mm, despite the fact that I am useless at painting and have a well founded phobia of fiddly uniforms.
The upshot of this is that I’m thinking about getting a couple of boxes of plastic French line infantry in greatcoats, as it was pointed out to me that they are much easier to paint than the bog standard uniform figures. This is probably a really bad idea and chucks my ACW plans out of the nearest window.

I am sorely tempted though!