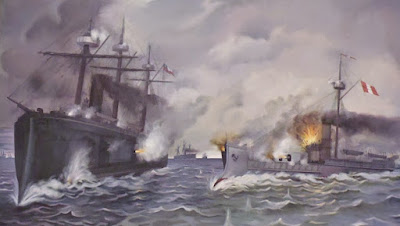 I have been thinking of adapting Broadside and Ram, which is designed for fleet sized games, for use with small scale, ship to ship scenarios like the Battle of Angamos. I really like the simplicity of Broadside and Ram and the fast play aspect of the game, so it would make sense to try it out with two or three ships a side but with a few tweaks to make it work better.
In the rules this would normally involve designating ships as individual commands, meaning that they do not require AP’s to move or turn. The change I’m thinking of trying out is for each ship to roll an AP dice at the start of the turn, allocating pips for movement, turning and repairs. I may consider making basic speed cost a single pip and maximum speed an additional pip, but I’m not sure that’s necessary.
I also thought I might fiddle the initiative system by determining the order of activation each turn using the AP roll but again I think this would overcomplicate things, rather than keeping it simple. I will give each ship’s commander an AP rating rather than the overall admiral AP rating, as that seems more appropriate, while I will also allow ships to form squadrons under one command, as the rules stand.
I will try out the tweaks over the weekend to see if they work.