Something for the Weekend? 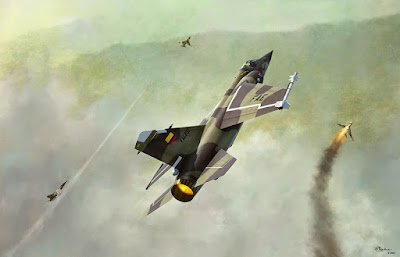 This weekend I thought I’d do something I haven’t done for ages, namely play a wargame scenario or two! I’ve been wrapped up in modelling and painting over the Summer and haven’t been to the local wargames club for months due to family commitments on game night, so my actual wargaming has been minimal. This is clearly not a good way to go and so it’s about time I got myself organised to do some old fashioned solo wargaming.
Now that I’ve finished both the FAP and FAE for the Alto Cenepa War and have the bases and aircraft profiles sorted, I thought I’d play two games with the same scenario, using two different sets of rules. I’m going to have a go at replaying the clash between two FAE Mirage F1’s and two FAP Su-22’s on the 10th February 1995, in which the Peruvian Sukhoi fighter bombers were both shot down. Not a great outcome for the Peruvians but that’s what happens when you don’t have RWR!
I’ll play this out with both Target Locked On! and the Wings at War rules, using Flames above the Falklands as a basis for the latter along with the aircraft ratings that I’ve worked out. It will be interesting to see what happens and also how the Wings at War rules actually work, as I have yet to use them in anger. I’ll also be cracking on with the Soccer War project and may even get some bases done for MiG Alley, if I can squeeze them in, so that I can start using my extensive Korean War aircraft arsenal.
Phew!