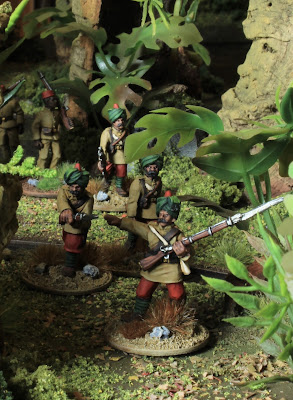 When it came to finding a suitable unit to represent professionally trained soldiers for my Congo campaign, I knew that I wanted something a little bit different.  I had already used ‚Copplestone Castings‘ Askaris and deliberately kept the uniform simple to hint at the rank and file nature of the unit.  I also had a notion that whatever I did finally use might also find a place in one of my other collections and so a plan started to form.  The combination of a couple of hours of web based research and a good deal of luck turned up the following image from the ‚National Army Museum‘ archives. 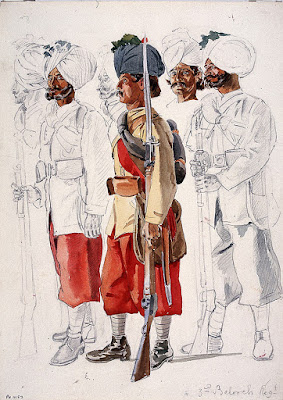 The watercolour and pencil sketch is credited to Major Alfred Crowdy Lovett, (c.1900) and shows six Sepoys from the 30th Regiment (Bombay) Native Infantry (3rd Belooch Battalion).  Now I am ashamed to say that I simply don’t have the knowledge, or depth of understanding, when it comes to the Native Indian Regiments, but was heartened to discover that Mad Guru of the outstanding ‚Maiwand Day‘ blog had produced a similarly striking unit to the ones in the sketch and so felt that this was a potentially legitimate line of enquiry.  I convinced myself that I could see a red Kullah in the central figure and so ordered up some of the splendid ‚Artizan Designs‘ Punjabi infantry.

Using miniatures from their 2nd Afghan War range, namely the NCO and Infantry at Trail packs (pack numbers NWF0123 and NWF0121) I was able to create just the effect that I was looking for and with the distinct possibility that they might see service in another theatre of operations in due course. 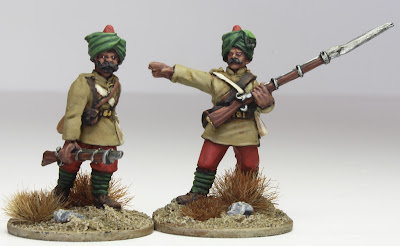 The miniatures themselves are fabulous sculpts, although I did baulk at the prospect of attaching the trailing arm to a couple of them – I am not a fan of the multi-piece miniature!  I love the idea of these Stalwart Sikhs organising the Askari and keeping them in good order, protecting the expedition as it penetrates deeper into the dense jungle of the Congo.  I am, of course, worried that I may have committed some ghastly faux pas with regards to the uniforms, but hoping that if I have that I will be quietly corrected. 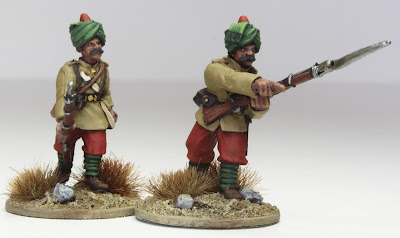