21. Oktober 2017Blogs INTComments: 0
A little behind on the posts but finally a few minutes to report back on the recent Star Eagles run through. A simple affair with the newly commissioned War Ricket Ajax sent off on a mission to attack the the capital of Frigia, the Ice kingdom ruled by Queen Fria.
Flash and his allies set off to intercept it.

For this encounter added in a couple new skills for pilots and I increased the quality scores, which in retrospect I should have kept at Q4 for your average pilot by moving to Q3 there were very few misses on the night. 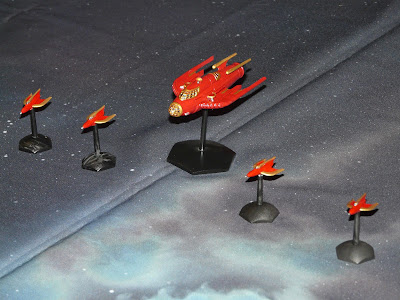 Ajax and it’s escort move towards the Frigian Capital. 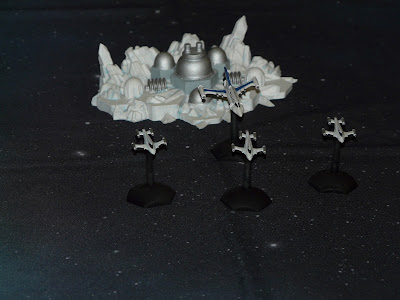 The lightly armed Frigian fighters move to intercept the Imperial forces with Flash in support. 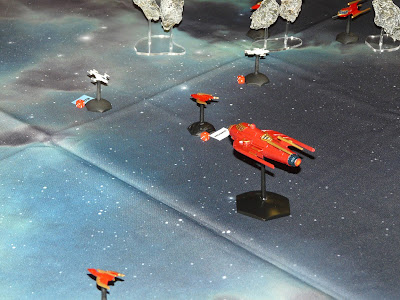 The Frigian craft are swept aside. Flash sends out a transmission for help. 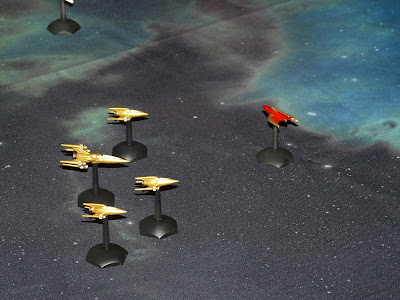 The Hawkmen Squadron enters the table and make their prescence felt, destroying an Imperial fighter.
After some very unluckly dice for Ming where he manages to roll early double fails two turns in a row, Flash evades the imperial fighters and tails the Imperial bomber firing his blasters at short range. The turrets of Ajax inflict minimal damage in return. 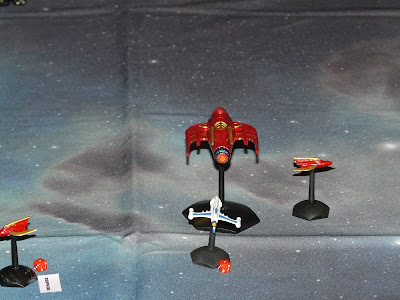 In true Saturday morning TV style, Flash brings down Ajax with less than a minute or two to spare just as it was lining up for it’s bombing run.
It’s been quite a gap in between games but Star Eagles is quick to pick up and the game has some very subtle rules that keeps players interested along the way, unlike other Songs of Blades rules, once activated a ship can perform its move without the need to use an action, actions are only required to perform special moves such as firing or special moves.
When tailing and with aimed fire you find yourself pretty much out of the fight very quickly but long range and side fighters stick around for a while before they are back in the box. Watch out for flying through unactivated enemy ships who take pot shots at you as cross their arc that can be annoying.
There are a couple of areas which need some clarity or perhaps a deeper understanding of the rules.
In particular ships with multiple weapon systems and whether once action allows you to fire all guns?
The question of height given the over and under taking between Flash and the War Rocket at the end and does the enemy get a free shot when you leave his arc rather than simply passing through?
But all in all a good game, I plan on pulling together reference cards for each fighter and introducing a few more weapon variables together with introducing player strategy cards in the next game to see how they change the dog fights.
A fun nights gaming and plenty of action.
You should be Flash and Star Eagles making an appearance at Hammerhead in March let’s hope the Kickstarter is not to delayed.