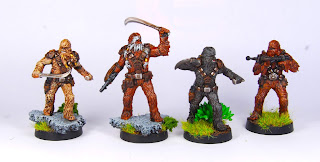 Hey all!
Okay, I’ve got a BUNCH of Star Wars Legion figures painted up over the last few weeks, so I’ve got to share them!
I’ve really enjoyed doing the figures (well, not the Stormtroopers) and was looking forward to these wookies!
They are IMPOSING figures… just HUGE.  I wanted to keep them a bit individual… I feel like wookie fur should have patterns and differences.  So I went with a blonde wookie, an older wookie, a black haired wookie, and a brown wookie.

Overall very happy with how they turned out… they just LOOM over their enemies!
Coming up?  A rebel laser cannon, Han and Chewie, and Emperor Palpatine and his guard!