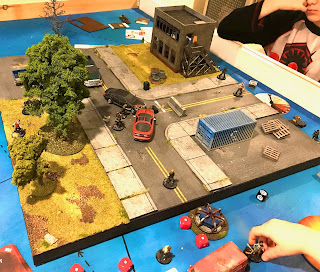 Hey all!
As promised, I HAVE been doing stuff lately.  I took just a COUPLE of photos of the most recent thing… a Walking Dead campaign game my son and I are playing.
With our initial 60 points, we bought three survivors… a man, a woman, and a kid (Carl, but we used a girl figure, so we are calling her Carla…)  The first few missions went okay, although we didn’t find a lot of food, and our guys started to starve.  We DID find a pistol, which we are saving until things go badly.
The mission above (a „Surrounded!“ mission) went SUPER quick… there was only a single supply, and it started right next to us, so we grabbed it and ran! 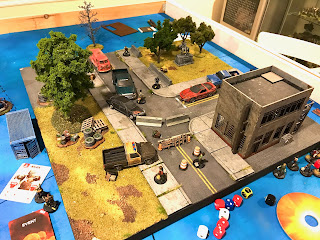 We began to leave the kid behind on missions, so that she could rest… our lack of food was causing some issues.  This was our next mission… a food supply run.  The traffic jam would give us some cover… I pity the poor people caught in that jam, who were likely torn to pieces! 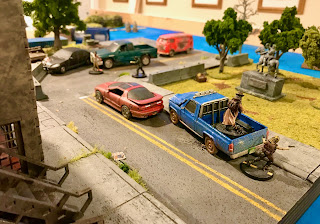 This mission STARTED well… supplies right near the entrance, and zombies being  pulled to the red car by a car alarm going off, allowing our two survivors to skirt around the edge of the board towards the supplies near the rusted Coca Cola van…

But things can go south QUICK.  As the car alarm drew more and more zombies to the area they got more and more agitated, and suddenly a swarm of zombies noticed us and shambled down the street, coming our way!
Thankfully we were able to just turn and flee, having found enough food to supply our group for a bit and also a piece of body armor for my woman! 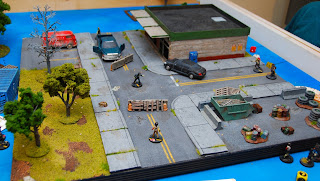 Here is the latest board… it’s a medical supply run, which is good… we will see how it goes!

BTW, if you want to see the rough rules I used for the solo campaign, here they are!