I’ve been thinking about the potential of 1/144th scale model kits for WW2 air gaming again, with an eye on something suitable for a simple multiplayer, participation style club or show game. I had some initial thoughts about this ‚upscaling‘ idea before and had picked up a few Zvezda and Revell aircraft model kits with this is mind. These kits are quite cheap and there are sufficient aircraft available to re-enact some early to mid-war low level actions on the Russian Front: 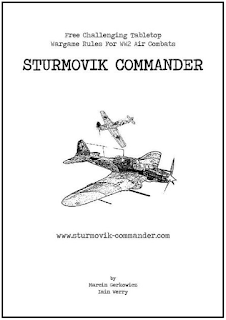 However, I got stuck on a set of hex based rules to fit with the Hexon terrain that I decided to make use of, as the most convenient way to organise movement and firing. I was thinking of a simplified version of the original Bag the Hun but thought it might be too fiddly. I didn’t even consider a non-hex based option until I found a download of Sturmovik Commander on the laptop hard drive. Now, this would be a potential set of rules to use, being hex less and relatively user friendly, not to mention being completely free. I will have to give them a closer look, especially as I have a very nice 6′ x 4′ winter terrain cloth that would be perfect!
http://assaultpublishing.com/sturmovik-commander/