4. Oktober 2018Blogs INTComments: 0
Here’s a Tamiya 1/48 scale plastic kit I picked up off ebay from a seller in Japan earlier this year. It was very inexpensive at $17.74 USD. It took about a month to arrive, but no complaints since the  shipping was free. As with all the Tamiya 1/48 scale kits I’ve worked on so far, it went together quickly and easily. After spraying it with a coat of Tamiya Dark Yellow (aka Dunkelgelb), it sat unfinished for many months as I wasn’t sure what kind of camo work to finish it with.  As mentioned in previous posts, I don’t have an airbrush, nor do I plan to ever get one – the maintenance puts me off. So I needed to find a pattern that could be applied by brush and still have a fairly decent result. I found a pattern on the internet the other day which looked do-able and gave it a try. 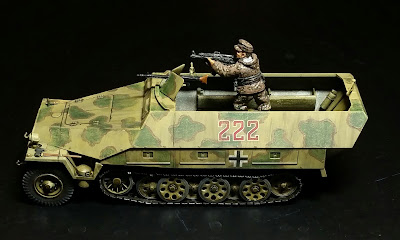 Here it is with a Victory Force Miniatures for scale. There were two long stemmed rearview mirrors on each front fender, but ended up breaking them off while painting. Figured they get broken during gaming anyway. 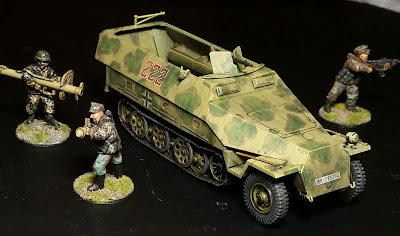 The irregular, splotchy green pattern with a dark brown border looked cool in the image I found. However, looking at how it turned out reminds me of an Aloha shirt floral print – might be a subconscious heritage thing growing up in Hawaii.

Tried to soften the camo pattern a bit with dry brushing and washes. 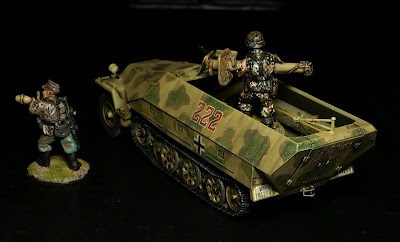 If I ever get another one of these, I’ll try out a different camo pattern. All in all a very good kit and sturdy enough for gaming (after the fiddly mirrors were removed). I know there are nice 28mm kits, but all of my other vehicles are either 1/48 or 1/50 (Corgi) models.

It was another nice change up from Napoleonic units and makes me think of getting a few more model kits. Well, thanks again for visiting and best wishes to you all.