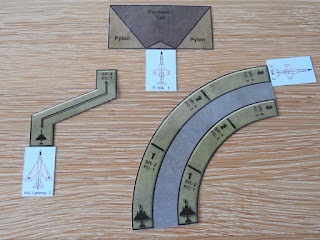 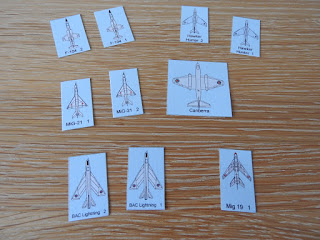 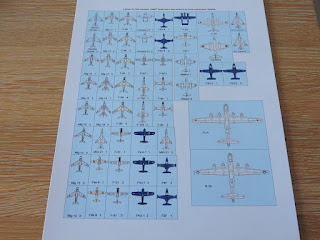 I didn’t get round to playing any further Target Locked On! games today, as the weather was really good for a change and we went out rather than being stuck indoors. However, I did find some better card counters to use for the next few sceanrios, a print out card sheet of which I had stashed in the back of the rules folder bundled with some other stuff.
I can’t remember where or when I originally downloaded them but they were definitely a freebie from some website or other, featuring Korean War and Cold War aircraft including Starfighters, Lightnings, Hunters, a Canberra, MiG 17’s, 19’s and 21’s. These are some of my favourite fighter aircraft and the counters are much more attractive than the utilitarian Paper Forge ones that I have been using over the holidays.
I’m going to use these for some Cold War era scenarios, which should be helpful in gaining some more experience with the gunnery rules and with less capable but still formidable aircraft. After a helpful email from Rory Crabb, in which he was really positive about many of my suggestions, I will be using the failed attack variation that I thought up i.e. allowing further manoeuvres but no further attacks. This should fix the flying in a straight line issue that I came across in the last two games.