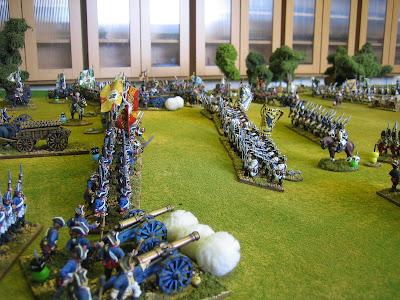 Initiative P8 / A5: The Brummers are in great danger of being overrun by the Austrian grenadiers of the Reserve then, (the sequence cards fall nicely for the Prussians, they turn Heroic Moment followed by Artillery Move) their officer sees his chance and withdraws them through the infantry line to safety. The other guns re-position themselves to obliquely spray canister into the packed ranks of the Austrian Reserve.

Meanwhile the Austrian cavalry on their right moves up and seeing it’s chance AHR24 (just in shot at the end of the Austrian infantry line) charges uphill towards a battery of Prussian guns (it doesn’t have the initiative point to fight the melee). 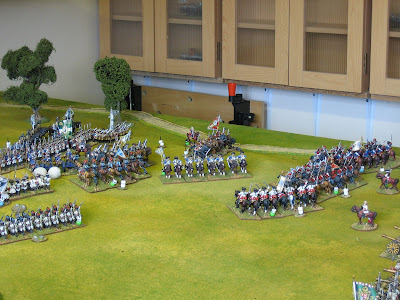 Initiative P8 / A4: The Prussians launch a massed cavalry charge down the slope onto the advancing Austrian cavalry below and (with Cavalry Move in the Open closely followed by Shock Cavalry Resolution) a large cavalry battle erupts on the right for a second time.

The initiative continues into the next picture. 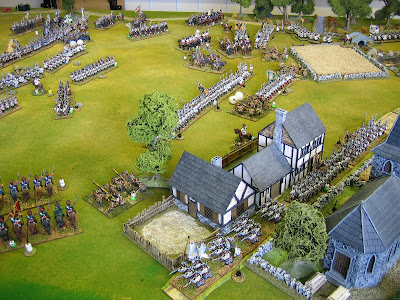 The Austrians bring up their infantry. The infantry of the ‚First Line‘ shakes out into a contiguous line of three units with a unit in reserve in preparation for a follow up assualt on the Prussians that the grenadiers have already mauled. The remainder of the ‚First Line‘ units race for Panten in preparation for it’s defence. On the right, the ‚Second Line‘ struggles to get organised – it is vulnerable to being caught in line of march by the Prussian cavalry coming down from the slopes above. 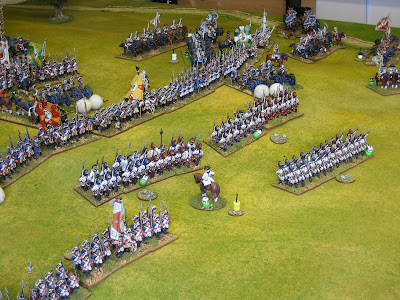 Initiative P7 / A0: The cavalry melee continues between ADR3 and PHR2a. PHR2a is routed with 1 UI loss, ADR6 is unsble to rally back (no room) so stands in place disordered.

Desultory shooting by Zeuner’s advancing infantry cause insignificant (1UI) loss to the Austrian elite squadrons of the reserve but, up on the slopes the Prussian artillery blasts away another unit of grenadiers.

(Note, I now have enough grenadier figures to represent the three units of grenadiers that remain. I have used them so that things look as they should). 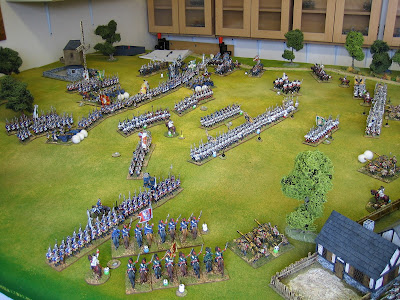 Initiative A13 / P3: The Austrians bring more cavalry into the fray. ACR21 charges PDR11 and (melee actually resolved at the end of the phase) PDR11 is routed with 3UI loss, ACR21 is unable to pursue due to intervening Prussian infantry and mills about in confusion half way up the slope.

(In the picture ACR21 are the cavalry in offset column).

Zeuner advances towards Panten, refusing his left in the face of the advance by units of the Austrian ‚First Line‘. 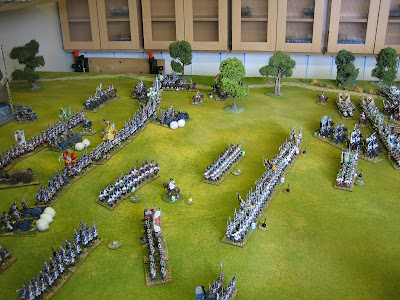 Initiative P10 / A3: The cavalry combat continues: Whilst ACR21 is milling around and ADR6 are disordered they are charged by PCR5 and PHR2b and melee immediately ensues (no resolution sequence card is required Vs disordered troops).

Up on the slopes the canister fire from the batteries is devastating. One unit of grenadiers is now shaken (with 3UI loss) whilst another is completely torn to shreds (destroyed).

(I’m predicting a Prussian victory but there are, as yet, a lot of uncommitted Austrians entering the fray. The action this phase continues into the next shot). 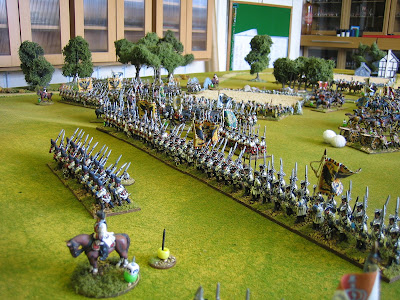 The Austrians of the ‚Second Line‘ deploy into line. Now their serried ranks really do look daunting to the Prussians. 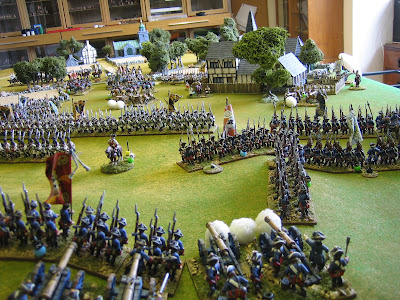 PIR15 (the Garde) in Zeuner’s command fires into the Kolowrat dragoons (elite squadrons) at point blank range (they are shaken with 3UI loss) then scattered by PIR2. The second line of elite squadrons (ADR1) are no longer screened and PIR15 lets go more volleys – ADR1 is routed. The way to Panten is almost clear! 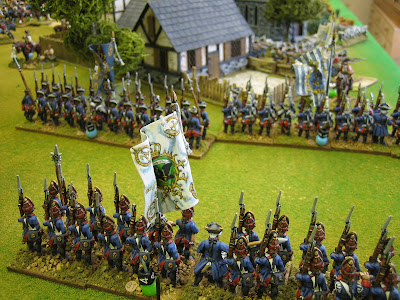 P9 / A1: Zeuner’s infantry reach the outskirts of Panten rolling over a battery of (unloaded) Austrian guns as they go. 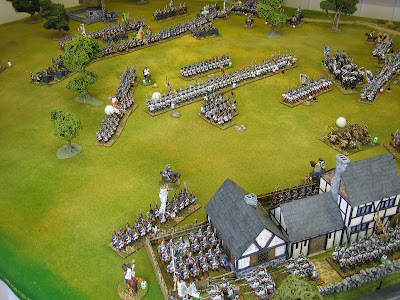 P9 / A6: Zeuner’s infantry move into Panten, occupying the builds on its western side. On the slopes of the plateau, Prussian infantry moves to roll up the attack of the Austrian ‚First Line‘.

(The action in this phase continues into the next picture). 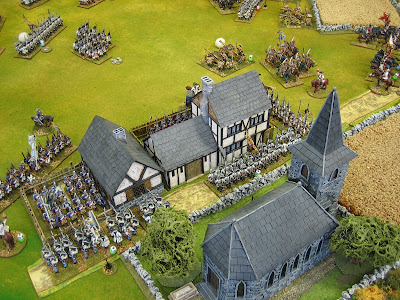 The Austrians begin their attack up the hill. Much of the second line is being hampered by the number of routing and pursuing cavalry in front of them. The Austrian infantry around Panten deploys into line to deal with their unwanted guests. 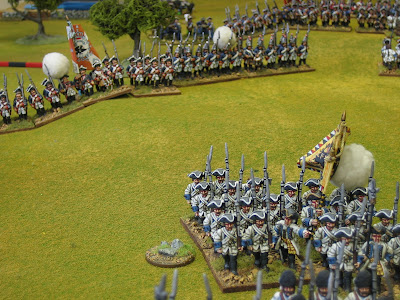 Initiative A7 / P2: The rearward Austrian cavalry of the ‚First Line‘ deploy into line in the centre of the field. The routing cavalry clears the path for the ‚Second Line‘.

(In our version of the rules, routers and pursuers move on all Major Morale cards turned –  there are two in each deck. We do not use the standard Major Morale rules, ours are better, we think).

On the slopes AIR23 of the ‚First Line‘ is routed exposing the Austrian lines to a possible flank attack – if one can be organised! 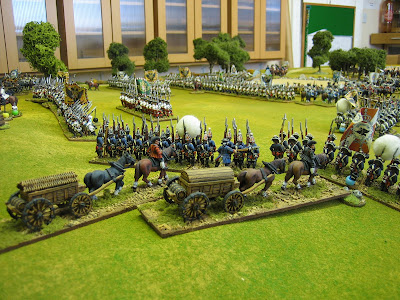 Initiative P13 / A4: The Prussians can see the opportunity (and luckily they have an Artillery Move card left as they close the turn) and push their artillery forward into a position (if they can deploy) from which to rake the Austrian lines as they come up the hill.

Here are three more shots of the action at the end of Turn 3. 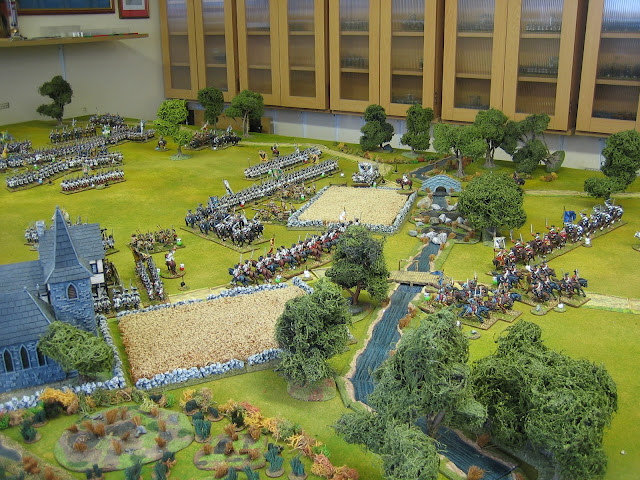 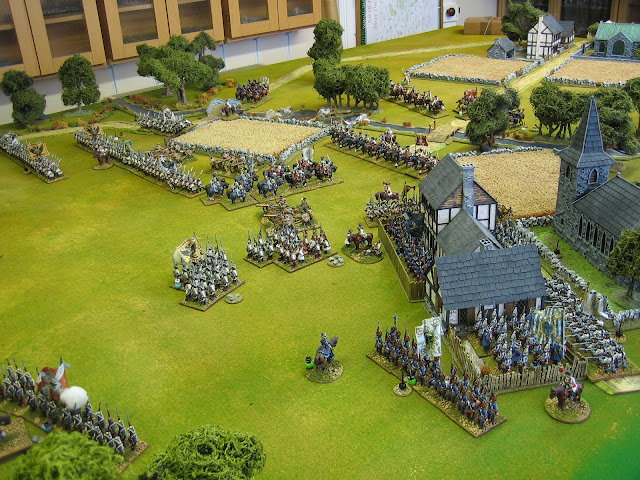 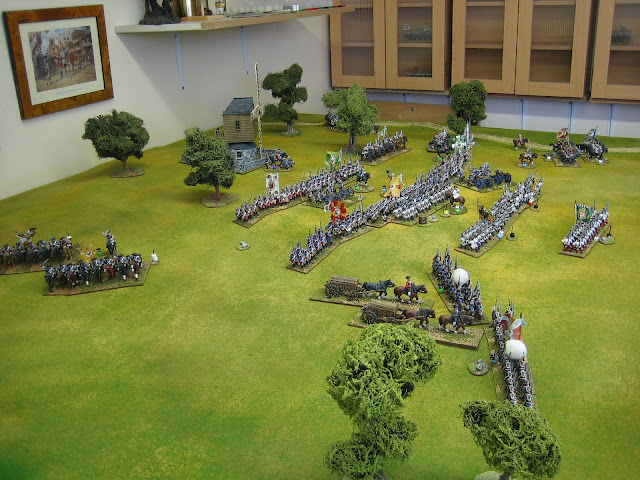