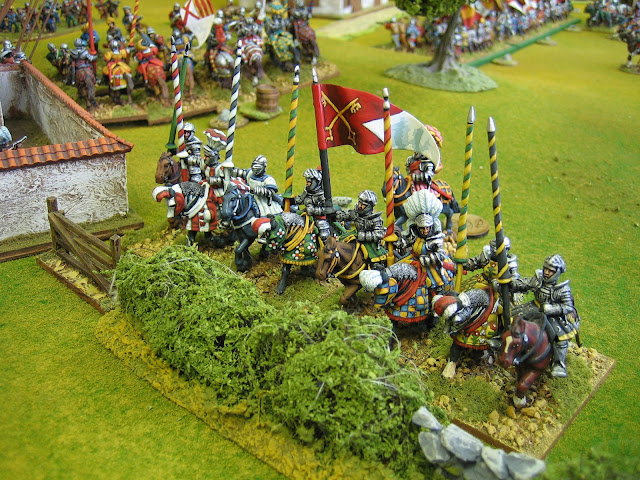 Last night, after two trial runs, we played the first session of the Battle of Garigliano scenario. If I say so myself, it is developing into a great little battle.

Unusually, there was an extra player for last night’s session. Graham’s friend Don was up north on a two day pass and he took charge, most successfully as it happened, of the Spanish right; I took the Spanish left, mostly unsuccessfully; Graham took the French right, holding the French bridge in the face of my woeful opposition; Peter took the French left, only to watch his Swiss get shot to pieces and a charge of wonder by Prospero Colonna’s bodyguard cavalry. 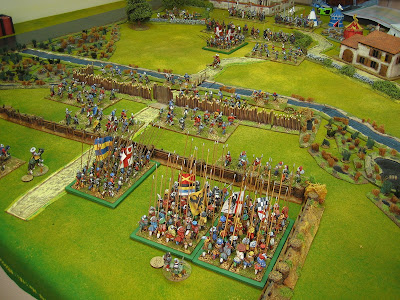 My forces at the bridge.

Before the game started I added a unit of Italian pike to bring the Italians up to their supposed numbers of 4000 and create two battalias rather than one.

For most of the game this picture didn’t change much. I had some minor success forcing the odd unit of Gascons to the other side of the river, but at the ened of the evening the French were still holding their ‚tête-de-pont‘. 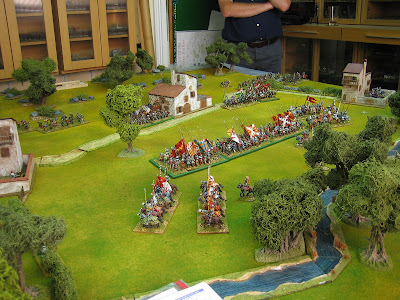 Don’s commands half way through the evening.

The Swiss at Castelforte are being shot to pieces, the Spanish and Italian cavalry are moving up on both flanks.

Just visible, disappearing behind Castelforte, are Colonna’s famiglia cavalry which have just smashed d’Algre’s Gendarmes – they will go on to rout a unit of Swiss pike, a unit of Norman crossbowmen, and a unit of mounted crossbowmen, all for a total loss of three stamina! Never in the field of human conflict have so many saves been made for so few (they were hit well over 20 times). 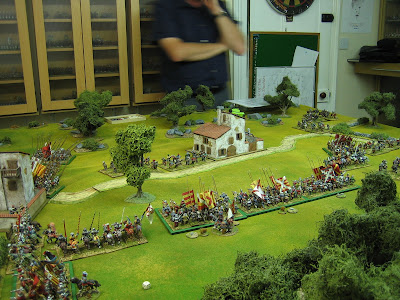 Towards the end of the evening the French left was in a good deal of trouble.

The Swiss have gone and the line has been filled by the Italians coming down from the mountains. They cause some casualties but, it’s a fire fight they cannot hope to win. 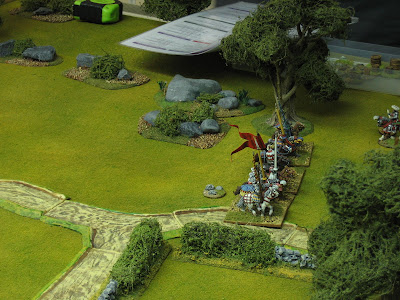 At the end of the evening Colonna’s famiglia cavalry, in all of its pomp, has finished it’s charge. 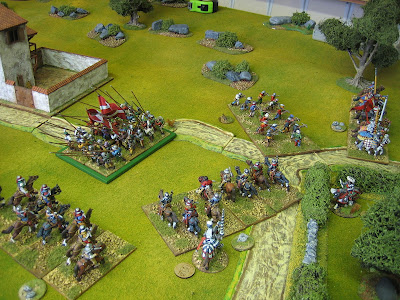 At the end of play.

The French pike on the left are now pretty much all that holds Castelforte for the French and even they are running out of options.

Peter has developed a fixation on Colonna’s famiglia cavalry (as had we all) and is desperately trying to finish them off with crossbow fire. Unfortunately, this battlia is now broken and they will have to withdraw next round – if they are lucky they might make Castelforte. 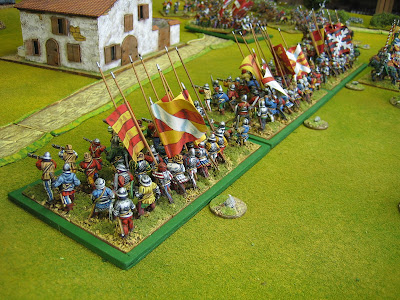 At San Cosmo, untouched Swiss pike (now of a broken battalia) are desperately trying to hold the line supported by contingents of their Italian allies.

Here too, Don was pushing his cavalry hard – in this case his Spanish knights. 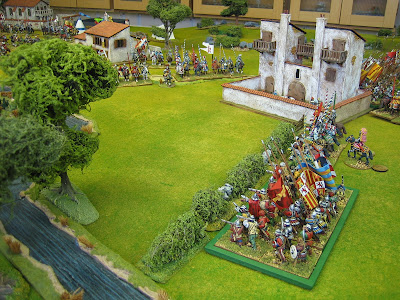 A Spanish colunela and Italian cavalry hold the left flank of Gonsalvo’s attack from interference by massed French cavalry, which withdrew as they approached. 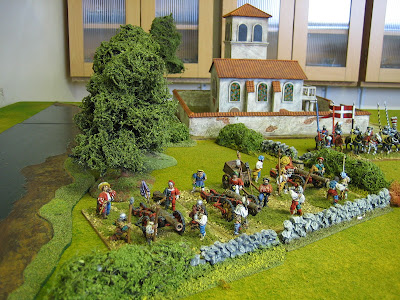 French artillery (counting as one large battery) awaits targets beyond the river at the French bridge.

In the background stands the Spanish objective – Formia. 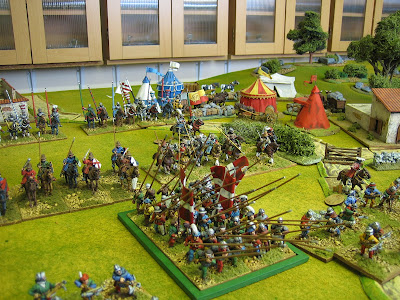 The French on their side of the river at the French Bridge stand waiting for the Landsknechts and Italians of Gonsalvo’s army to cross the river. 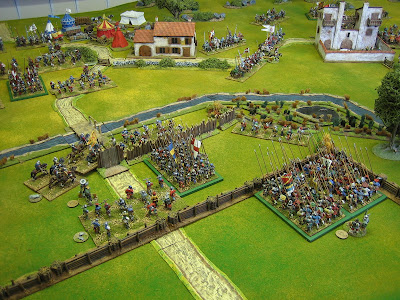 At the bridge I’m finally making some progress, though the Landsknechts have refused to budge for the entire evening.

Half of the palisade was knocked down by Italian infantry (before they were roughly handled by the French artillery) allowing Spanish Genitors to get inside the bridgehead.

I still have hopes that this attack might get somewhere. 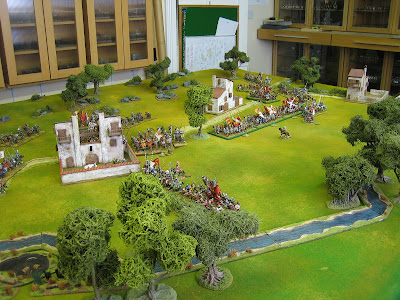 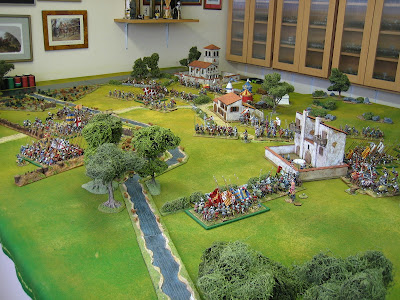 The general situation between the sea (left) and San Cosmo (right).