The Pearl of the Antilles – Haitian Revolution AAR #1Cold Steel.

28. August 2017Blogs INTComments: 0
August 1791 Bosou Delaroo had been hiding out in the foot hills above Limbe having slipped his chains a few months earlier, his name was published in the wanted pages of the Gazette Generale de Saint-Domingue but no one came looking as the weeks went on he was joined by others and soon his „Maroon“ band numbered more than 100 members.
Recently a detachment of troops filed up the mountain path but rather than firing on Bosou they threw down their arms and joined his community providing him with valuable firearms. 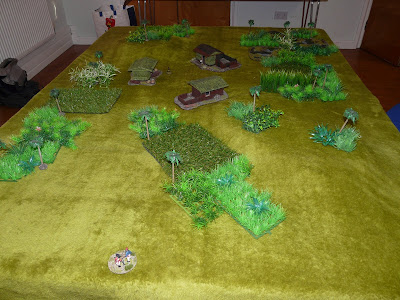 Bosou could sense change was coming and he prepared his men for the coming conflict.
An unexpected prize came his way one Sunday morning a visting English dignitary on her way to church was intercepted by a few of his men, she fled into the forest as her buggy was ransacked by the Maroons. 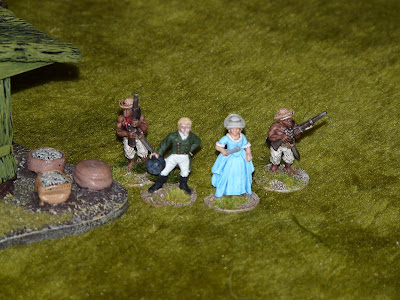 Find the Lady – Lady Smyth.
Unbeknown to Bosuo, Lady Smyth was an English spy who was off to meet a naval landing party to provide them with details of the defences of Saint-Dominique, as she darted into the bush she sent her man servant telling them of her location in an collection of abandoned huts near the coast and awaited the rescue party.
But who would find her first? 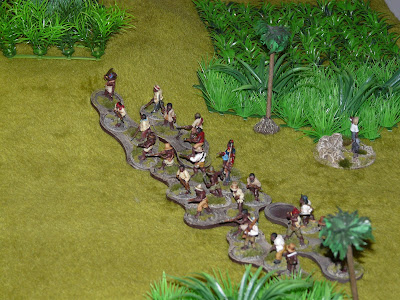 Bosou sent his largest detachment of troops forward – 30 Musket armed fighters looking to test themsleves against the British Navy. If they came to within 3″ of the door of any hut they could peer in and spot Lady Smyth. 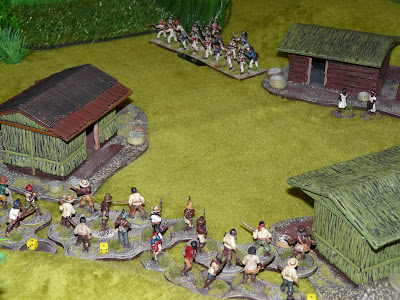 The Maroons get the drop on the Royal Marines and using there first fire bonus and single controlled volley poor fire into them inflicting over 16 points of shock across the two groups.
The Brits looked pale were they really to be bested by slaves?? 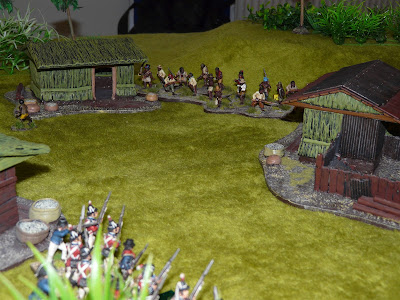 Holding firm the landing party presented and fired, the slower more accurate rate of fire started to tell on Bosou’s men, who returned fire at evey opportunity uncontrolled volley’s let fly but they were unable to find that rich vein of form that they found on that first turn. 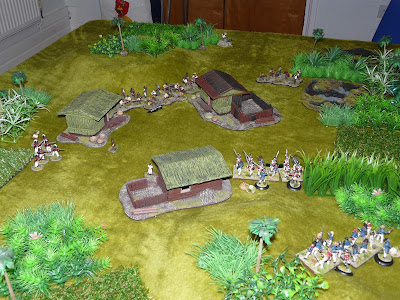 The naval landing party rushes up to support the Marines who were now facing off against the entire Maroon force including trained skirmishers previously in the pay of the French. 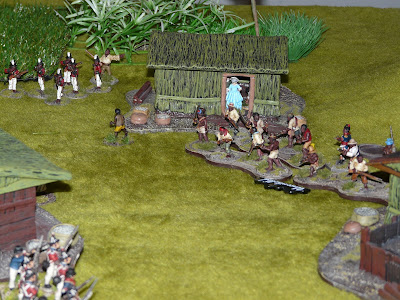 A firing event causes the Maroons to advance, flushes Lady Smyth out of hiding, but Bosou’s men are to busy blasting away at the men in red to move to capture her. 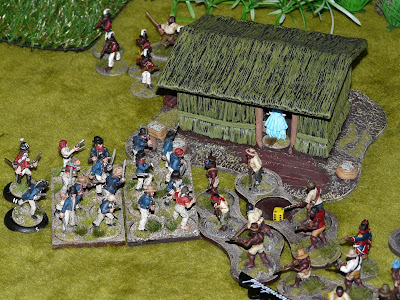 Fearing for Lady Smyth’s safety and her valuable knowledge the Navy charge home sweeping the ragged musket line away. The first group is wiped out, the Senior leader with them killed and the formation broken. Suddenly the force morale is very shakey as Bosou Delaroo looks on from the tree line. 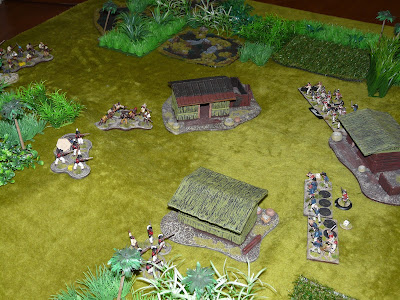 The remaining skirmish units snipe away at the Royal Navy who hold the centre of the village, a wound to a minor leader see’s the Maroon’s morale fall to zero and Bosou Delaroo leads his men from the field to the safety of the forest. Lady Smyth is out of harms way.
A fun encounter to blood the „Slave Army“ as I build up wider forces.
This run through has highlighted the need for a couple of tweaks to the force composition perhaps weakening the fire factor for the musket troops, the sailors fighting as clan in hand to hand were bloody deadly and definately won the day – Nothing like a little cold steel to shift an enemy from the field of battle.
Next up Free Men of Colour.