19. Mai 2018Blogs INTComments: 0
Making river sections is probably the most boring terrain job I’ve undertaken in years. It’s mind numbing, and I’ve been unable to make any progress on the river project for over a month.

However, even having bored myself stupid, I did need to make some bridges so that I can actually use what I’ve made. Bridges are much more interesting to make than river sections, so today I braced myself for the task and knocked up three new bridges for my ‚average‘ river (100 mm width of water). I was going to make four, but as I already have a ford (pictured here also) I wondered if I’d ever have enough road to link that many up. I decided three bridges and a ford should be more than enough. Of course, that does sound a bit like famous last words.

When I restock my foam board to make the banks for the narrow river sections – Aaaaargh! – I’ll also make a pontoon section which can, at a pinch, double as an ordinary bridge in emergencies.

Designing the bridges was pretty simple. I wanted them all to be different so that, in scenario briefings and during a game, each bridge can be easily described verbally. I decided on two stone bridges – one a double arched bridge and one a single arched bridge – and a wooden bridge (with stone abutments and a central stone pier). The latter was a cobbled together design, not based on any bridge I’ve ever seen and consequently, to me at least, it looks a bit queer. But, it will get troops across, and from an engineering point of view it looks sound enough. In fact, that’s probably what looks wrong about it, it’s over engineered. Ho hum.

The bridges are based on 2 mm thick MDF. The banks of the river, and the ‚walls‘ of the stone bridges are 5 mm thick foam board. The ‚roads‘ of the bridges are made from artist’s mounting board (quality card, about 1 mm thick). The underside of the arches is made from thin card (cheap Christmas cards, from cheap friends, not that I’m complaining). The stone pier for the wood bridge is foam board. All other detail, such as brickwork, buttressing (on the two arch bridge), railings and wooden planking is thin balsa wood. I prefer balsa wood, for this kind of thing, to any other substance, because it is so easy to cut up. The stippling effect to rough up the stone is artist’s heavy body acrylic paint (the tubed stuff from artist’s shops), as are the ‚road‘ surfaces. The bridges were painted with household emulsion paint. 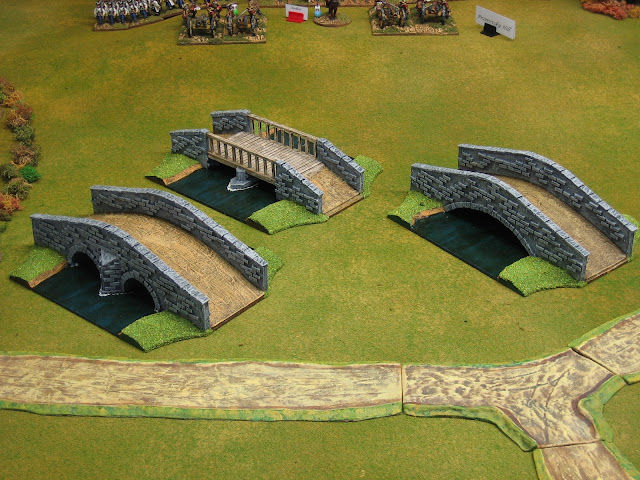 The ford (which I really like) made whilst doing the river sections themselves: 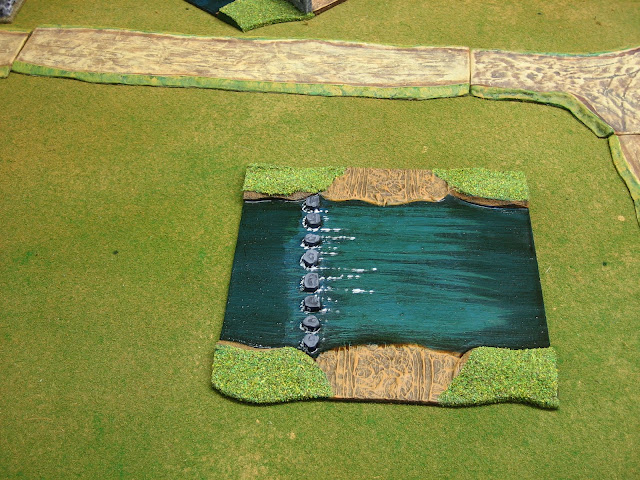 I’m on the finishing straight. Next up the narrow river sections (50 mm width of water) and ‚ponds‘ (some linking into the narrow waterways), and bridges to cross them. These too, will link into wider rivers using ‚tributary sections‘ when required. It’s a job I’m not looking forward to.

I may also make, at some point after I’ve recovered, some very narrow streams (30 mm width of water) but these will be made in a different way because the banks might look a bit silly otherwise. I’ll have to see how versatile the 50 mm wide rivers are.