7. Juli 2017Hersteller ENComments: 0
Alternative Armies will be releasing the fantastic brand new white metal codes for the mighty Visthowla Legion on the 14th of July 2017.  Big Werewolves in the service of the Ferach Empire. Sculpted by Sam Croes. Until then we are offering you the chance to pre-order them for your games of Flintloque and Slaughterloo at 15% off release price on all options and packs (including pro-painted) on our website.  Go HERE for the skirmish pack and the unit box or read on for more. 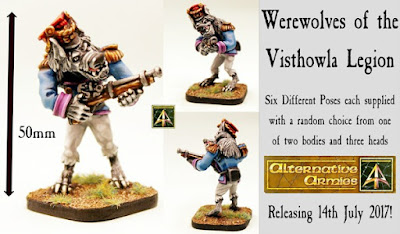 Often the mere mention of the name of the Visthowla Legion makes enemies flee from battle, these are the crack Infantry of the Werewolves. Visthowla towering over their comrades armed with the best weapons and led by the best Officers. There are several legions each serving where most needed, some with the Grande Armee du Norde with almost all of their original numbers still intact.  The structure of a Visthowla Regular legion is as follows. Three Battalions make up a Legion. Each battalion contains eight hundred troops at full muster and have ten companies one of which is Grenadier. Each company has eighty Big Werewolves which are separated into two Platoons and a headquarters element. A Section normally has six to twelve Werewolves including an Officer, a couple of Sergeants, a musician and standard bearer, the rest being Legionaries. They are armed with a Coltzen Musket, Officers a Sword. Uniform consists of blue tunic and grey trousers a red shako with gold eagle, silver fittings and black shoes. Facing colours vary but violet is the norm. Equipment and straps are white.  Find them in 5030 Slaughterloo and 5026 Death in the Snow! 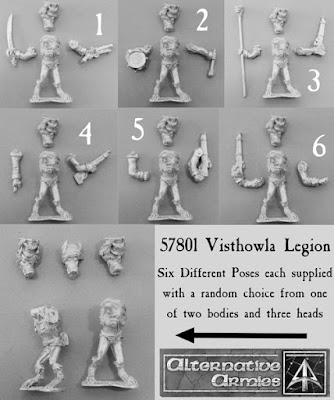 We are doing something a little different in the codes for this new release of big miniatures.  We have a Skirmish Pack and a Unit Box listed separately. In the 57801 skirmish pack you can get a set of all six poses or select your choice of each of the six poses as singles.  In the unit box under 57801U  you select a full sixteen werewolf kits for a full Slaughterloo unit with an additional saving versus the skirmish pack.  We do this due to the mighty nature of these ferocious soldiers.
57801 Visthowla Legion
This 28mm scale white metal miniatures skirmish code gives you the big werewolf soldiers of the Visthowla Legion who fight in the service of the Emperor Mordred of the Ferach Empire against the Undead of the Witchlands. These are partially modular and posable miniatures which once assembled stand around 45mm to 50mm tall and are supplied with 30mm square cartouche bases.  Every pose is supplied with one of two different bodies and one of different three heads.  There is an officer with sword and pistol (1), a musician with drum and drum stick (2), standard bearer with pole and Coltzen Musket (3), sergeant pointing with Coltzen Musket, trooper marching with Coltzen Musket (5) and trooper cradling Coltzen Musket (6).  Our image shows the poses with the same head and body option.  Note that if you order multiples of a pose we will ensure a variety of body and heads within that.   Choose from a skirmish set of all six poses and from the numbered single poses of the six.  Supplied with Bases.  You can also select pro-painted and based.  Go HERE.
57801U Visthowla Legion
This 28mm scale white metal unit code gives you a full sixteen strong big werewolves of the Visthowla Legion for Slaughterloo unit.  As with the skirmish set this contains all six partially modular and posable miniatures (Officer, Musician, Standard, Sergeant, Trooper, Trooper) and then an equal mix of the pieces needed for ten more troopers armed with a Coltzen Musket. Supplied with resin cartouche bases.  You can also select pro-painted and based.  The unit gives you an additional saving off single and skirmish set options.  Go HERE.
Here are some scale pictures of our 57801 Visthowla Trooper cradling musket (6) with some of the characters from the 5024 Escape from the Dark Czar starter set for Flintloque.  As you can see it stands taller than an Ogre and a lot larger than an Elf or Zombie at 50mm from clawed feet to shako. 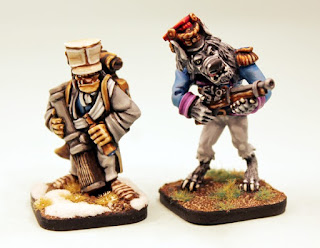 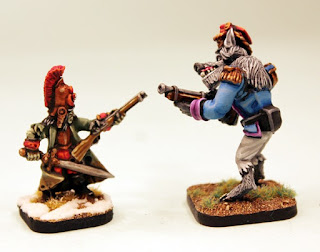 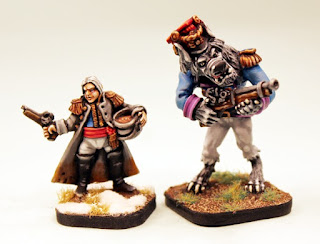 We hope you like this cracking new full set for Flintloque and Slaughterloo.  A much requested formation which replaces the original single trooper sculpted by Steve Young.

Upon general release on the 14th of July 2017 all orders will ship worldwide and we will present more information and images along with a Uniformation article to download with statistics and more.
Thanks for Reading,
GBS