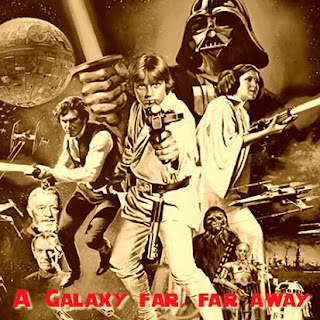 Having safely received the blueprints for the Empire’s new super weapon, the Death Star, R2-D2 and C3-PO need to make their escape from the stricken Tantive IV. An escape pod proves the obvious method of egress and with no life signs scanned, the Empire takes little notice of the discharging pods. Did our beloved astromech know that just below the unfolding space drama was the very planet that the intended recipient of the plans inhabited?  Good luck or careful planning aside, the two droids find themselves lost in the inhospitable desert wastes of Tatooine. 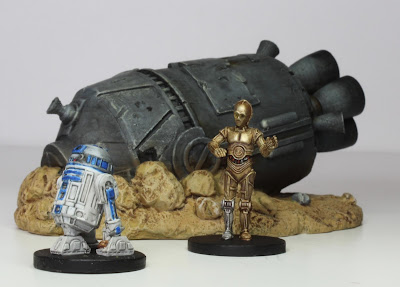 This, then, represents the pair’s crashed escape pod and is from ‘Combatzone Scenery‘.  I had already bought some of the Skirmish terrain, perfect for use with Imperial Assault*, but when I saw this I found it very hard to resist.  Although not required for the game, it does add something to the feel of the table and I have justified the purchase, by suggesting that it could also be used for all manner of post-apocalyptic scenarios!
*More of that in another post. 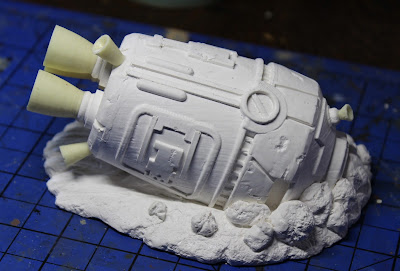 Made from a resin impregnated plaster, the main piece is quite a lump and, with the addition of a few additional resin retro-rocket nozzles, is simplicity itself to put together.  One of the company’s boasts is that the material requires no priming, but I was a little concerned when my initial layer of colour seemed to struggle to adhere to the surface in a couple of places. 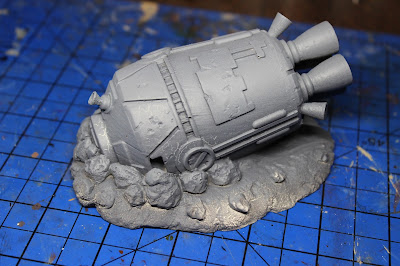 There was nothing to do but press on regardless and what followed was a delightful period of drybrushing, with only the smallest details picked out with a brush.  I had made the conscious decision not to use metallic paints and so what you see is purely built up with greys before adding some dust and damage, again with a drybrush technique. 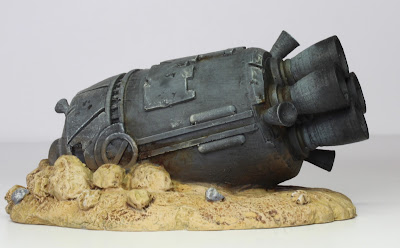 Great fun to do and with my initial fears regarding the material allayed, I am absolutely thrilled with the results, but wait!  What was that stirring in the dunes? 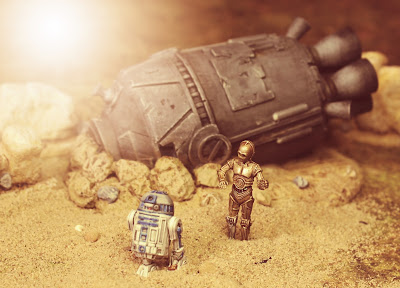 „Don’t call me a mindless philosopher, you overweight glob of grease!“