What a Tanker! Panzer Plans 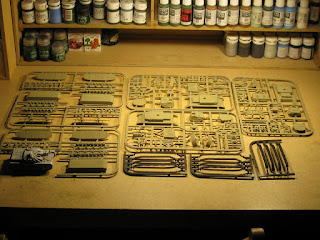 I’ve decided to crack straight on with the What a Tanker! project, this time going back to the Panzerwaffe with a trio of Plastic Soldier Company Panzer IV’s and the single Armourfast Stug IV that I started on a while back. As you can see, this lot takes up quite a lot of workbench space but, once I’ve assembled the various bits into tank shaped objects, it should be a lot less crowded.
I like the fact that the tracks are separate components in these PSC kits, which should speed up the production line and avoid the fiddly painting round the road wheels that I’ve had to deal with of late. I may well add another assault gun to this lot or something else to beef up the baddies, once I’ve put the Panzer IV’s together over the coming week.

The Mark IV’s have been undercoated in Halfords Ultra Matt Khaki and will be painted up in snow camouflage just like the Panther and Jagdpanther that I’ve already completed, with at least one minus the hull bazooka skirts for a bit of visual variety. I’ll aim to decal the three tanks with common insignia in order to give them the look of a proper unit, albeit at reduced strength due to battle losses.